Female Football News From Around Australia 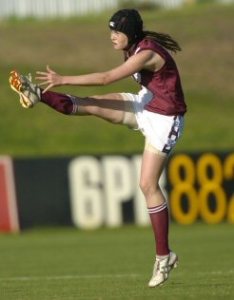 With female participation in Australian football the fastest growing of all segments of our game, there is a lot happening around Australia. All States and Territories now have women's football leagues, and Youth Girls competitions now exist in all but Tasmania and the Northern Territory.

Keep checking the websites of leagues in other States for more information on what is happening around Australia.

JENNY Elliott is used to working in a male dominated environment.

One of only five women working with AFL Northern Territory from a staff of 35, Elliott is also the only female in the football operations department.
http://www.ntnews.com.au/article/2009/11/20/102751_ntsport.html

17 year-old casual Lions employee Katie Brennan - who is no relation to Lions livewire Jared Brennan - has topped off a great year on the field by winning the Rising Star Award through Womensport Queensland.
http://www.lions.com.au/news/newsarticle/tabid/5085/newsid/87279/default.aspx

Coast girls taking to AFL in a big way

The AFL has long provided Sunshine Coast boys with opportunities through Auskick and school and club competitions, but this year the girls have stepped up for some recognition.
https://websites.mygameday.app/assoc_page.cgi?c=1-4609-0-0-0&sID=108278&news_task=DETAIL&articleID=10630365

Debbie Lee welcomed members to the meeting and gave an outline of the achievements and accomplishments during the 2009 season.
https://websites.mygameday.app/assoc_page.cgi?client=1-3068-0-0-0&sID=30737&&news_task=DETAIL&articleID=10445787§ionID=30737

The AFL Canberra Youth Girls Development Squad was established to provide Youth Girls players the opportunity to develop and improve their football knowledge and skills.
https://websites.mygameday.app/assoc_page.cgi?client=1-1051-0-0-0&sID=56282&&news_task=DETAIL&articleID=10521506§ionID=56282

Central Districts Junior Football League is currently the only Junior Football League that caters for youth girls.  They have an U13's and U16's Youth Girls competition.  It is expected that other Junior District Leagues will follow suit in 2010.
https://websites.mygameday.app/assoc_page.cgi?c=1-6951-0-0-0&sID=152254