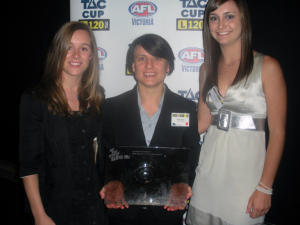 Women’s participation in Australian Rules Football (AFL) is the fastest growing segment of the game. AFL Victoria’s Youth Girls Academy was established in recognition of the number of talented female players moving through the sport to the elite level. The Academy was established in 2008, with support from the Essendon Football Club, to provide Victoria’s most promising Youth Girls players with on- and off-field development opportunities similar to those for the boys. Players are selected for the two-year curriculum based on their playing ability, leadership and commitment to the sport. The program also incorporates a squad of 10 promising female field umpires.

The girls are encouraged and supported to pursue ongoing education in the sports development industry and to make the most of career opportunities. Volunteer work is also an important part of the program, with the girls participating in up to 2,000 hours of community service each year. By providing both on- and off-field development opportunities for the girls, AFL Victoria hopes to emphasise that developing into a great person is just as important as developing into a great footballer.

For more information on the finalists and the 2009 SRV Awards: http://www.sport.vic.gov.au/web9/dvcsrv.nsf/headingpagesdisplay/active+communities2009+sport+and+recreation+awards