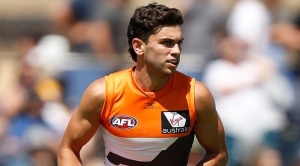 Seven TAC Cup players selected in the top 11 picks of last year’s NAB AFL Draft – including the Draft’s top five picks – stepped out for their new clubs across the first weekend of the 2017 JLT Community Series.

Four of the seven are former Sandringham Dragons, with Gold Coast’s Jack Scrimshaw the only draftee amongst the TAC Cup club’s unprecedented haul of five top-11 selections to miss out on an opening-week berth.

In total, 14 TAC Cup players selected in last year’s AFL and Rookie Drafts played in week one of the JLT Series.

2016 Dragons premiership star Tim Taranto (pictured) was arguably the most impressive of them, with GWS’ no.2 AFL Draft pick recording 21 disposals (18 kicks), 10 contested possessions, five marks, seven inside-50s, six clearances and five tackles from 81 per cent game time in the Giants’ 33-point defeat of West Coast in Narrandera. The midfielder/forward faces a tough ask to break into an on-ball division featuring names such as Shiel, Coniglio, Ward, Kelly and Scully but couldn’t have done much more to push his case on Saturday.

Essendon’s no.1 AFL Draft pick Andrew McGrath – best-on-ground in the Dragons’ flag triumph in September – was unveiled in the Bombers’ 11-point loss to Collingwood at Etihad Stadium. The smart midfielder/defender only managed nine disposals in 63 per cent game time but his physical and mental maturity has him in the frame for an early-season AFL debut. Collingwood father-son recruit Josh Daicos (pick no.57 from the Oakleigh Chargers) also stepped out on Thursday night, recording seven disposals in 41 per cent game time.

Two TAC Cup players selected in the 2016 Rookie Draft made an impact in Geelong’s four-point defeat at the hands of Hawthorn in Launceston on Friday night. Former Calder Cannons defender Zach Guthrie racked up 24 disposals (20 handballs) and kicked a goal from 68 per cent game time for the Cats while ex-Geelong Falcons speedster Jack Henry also booted a major from five disposals in 53 per cent game time.