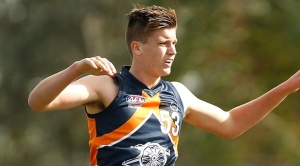 Calder Cannons key forward Mitch Lewis (pictured) played that day and is now at Hawthorn after being selected with pick no.76 in the AFL Draft, while the following participants were taken in the Rookie Draft:

198cm Lewis will get the chance to develop under four-time premiership-winning Hawks coach Alastair Clarkson after kicking 13 goals and averaging 14 disposals and six marks per game in 10 TAC Cup matches for the Cannons this year.

203cm Marshall, 21, played all 18 games for the Roosters in 2016, working in tandem with veteran Orren Stephenson and winner of Foxtel’s ‘The Recruit’ Matthew Eagles in North Ballarat’s engine room.

The athletic Hanrahan hasn’t come through the traditional TAC Cup system, instead representing St Kevin’s College in school football this year and playing at junior level with East Brighton.

The 2016 drafts by the numbers