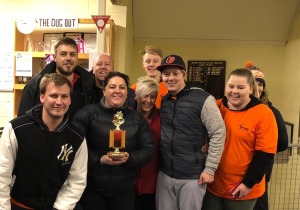 Once again we were able to entice participants out into the cold Tassie evening to play in our Autumn Social 7s competition.

A record 8 teams registered so the 6 week program was extended to 8 weeks with around 75 participants, this included some baseballers that took a few games to connect with the ball….

First game started 6:30 with the  last game 9:30 so the clubrooms were definitely a hit on the cold evenings with hot snacks and drinks available.

On the first evening games were going really well with 3 timeslots completed and the 9:30 game halfway through when an outfielder came in and said the sprinklers were on outside the homerun fence- no problem..  Next innings the sprinklers came on just inside the home run fence- small problem but we could play around that with players dodging the spray BUT, 5 minutes later they came on in the infield- problem.  Players went in all directions. Lots of laughs but we had to abandon the game.  Contact with the local council ensured it didn’t happen again.

After 3 weeks one of the teams had to withdraw due to new work commitments so this cut out the 9:30 game (NOT a problem) and created a bye.

To ensure participants were at the ground around the same time on the last evening, teams were rostered to play1 inning against two different teams.  (AvB, BvC, CvD, DvE etc).

This proved very successful and kept all moving.

Points from these games were added to the final total.

Following the last game, presentation of the ‘STSA Social 7s’ shield was made to

Son of a Pitch with  STSA providing snacks for all.

Games were competitive but all were played in good spirit.

Past Social 7s competitions have resulted in a few players registering to play in the regular roster and some of our new players from this roster have indicated they are interested in joining a fastpitch club.

Mention was made of a Spring roster to start August 15th and all teams indicated they are keen to participate.