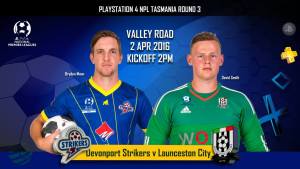 Devonport showed they are the side to beat this year in the Tasmanian NPL with a dominant 5-0 win away at Launceston City. They rarely looked troubled and posed City problems all day with their quick transitions from defence to attack. Port were comfortable for most of the game, their no nonsense defending kept any attack City could muster to a minimal threat and Giantsopolous was rarely called upon.
In the early minutes of the game it seemed as if City would be up for the fight, but as the game went on Devonport started to get going feeding Gorrie and Denehey down the flanks, causing City all sorts of headaches. In the 18th minute it was one of those men in Gorrie running onto a long ball getting in ahead of Sciulli to the ball and striking it with his first touch across Dave Smith and into the far post to make it 1-0 to Devonport. A few minutes after their first goal Devonport felt like they had earned a penalty when a ball struck a hand of a City player but Kim Barker waved the calls away much to the angst of Devonport’s players. Soon after Mann got himself into some space to fire a shot off that was well saved by David Smith, the parry fell to Denehey who popped it back into the danger area and after the ball bobbled around, Mulraney sent his volley just wide of the far post.
The score line remained at 1-0 going into the half time break, leaving City with a chance to get something out of this game, but it wasn’t to be. It was another stirring second half performance by Devonport, from the half time kick off Devonport started to turn the screws as they looked to quash and threat City would pose in getting a result.
Their constant harassing and quick wide play was rewarded in the 53rd minute when a Gorrie cross found Stone whose shot was saved and fell to Barnard who had no problem tapping it home to make it 2-0. Only a matter of minutes later a free kick from out wide was sent in to the back post by Stone and it evaded everyone and went into the back of the net to make it 3-0. Devonport didn’t have to wait much longer for their 4th, another Stone delivery this time from a corner caused City all sorts of problems as it had all day, the ball bobbled around the 6 yard box until the big man Gratton poked it home.
The Devonport party was complete when in the dying seconds of the game Chris McKenna ran onto a ball with only Smith to beat, he gets his chip perfect sailing over Smith and sneaking just inside the post to seal the perfect evening for Devonport.
Launceston City coach Lino Sciulli was thoroughly disappointed in his teams efforts labelling it as a ‘crap’ performance and that after three home games in a row he’s surprisingly glad to be playing away next week at South Hobart.
Devonport Strikers assistant coach Nick Owen was pleased with the performance going into two massive games in the next fortnight.
The result sees Devonport on top of the league once again going into a big fortnight where they face Hobart JEEP Zebras next week down at KGV in an important top of the table clash, then back at KGV the week after for the Lakoseljac Cup against South Hobart.