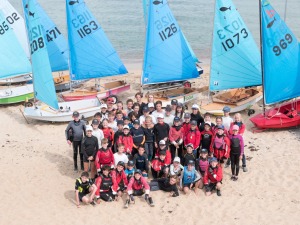 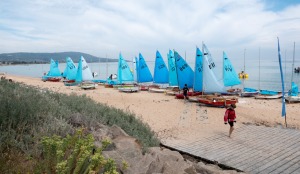 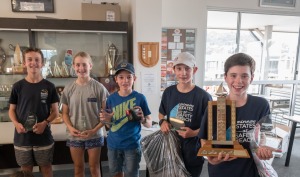 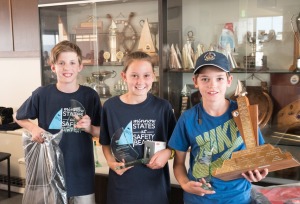 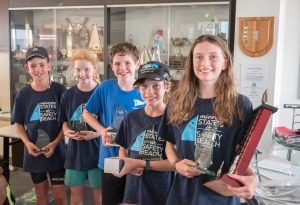 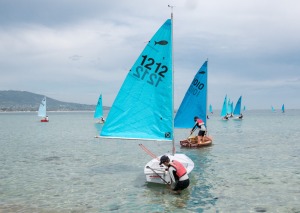 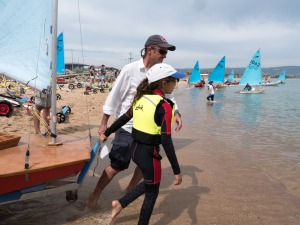 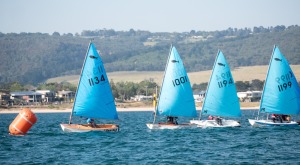 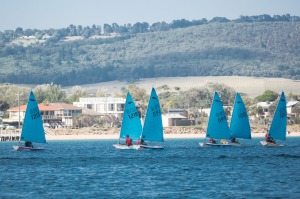 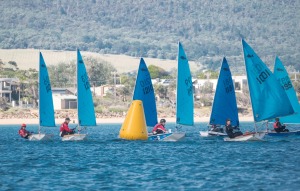 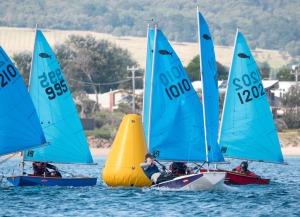 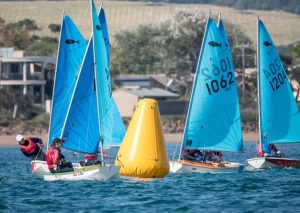 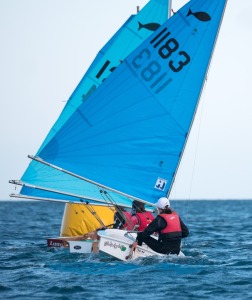 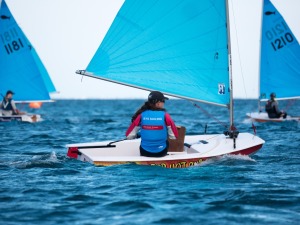 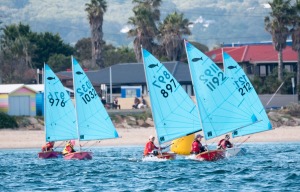 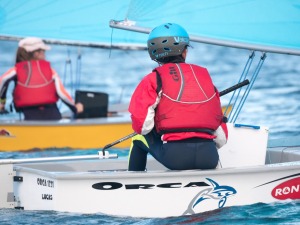 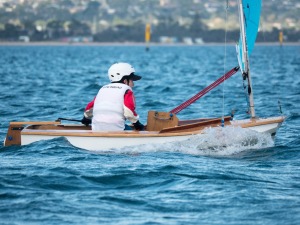 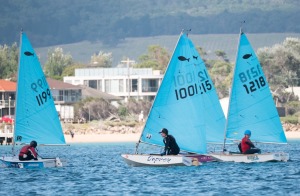 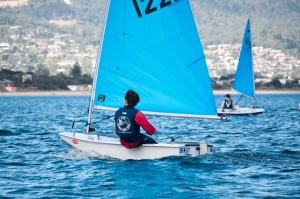 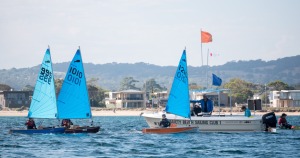 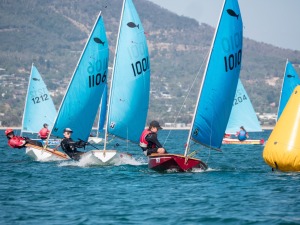 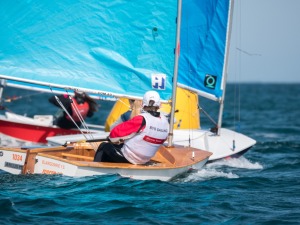 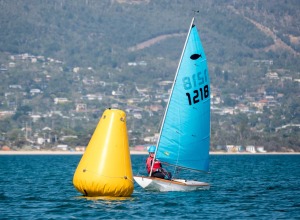 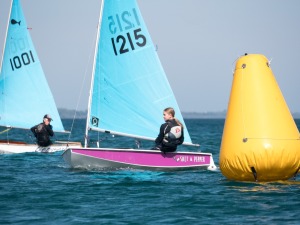 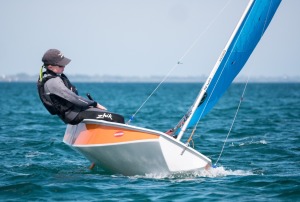 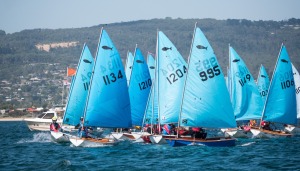 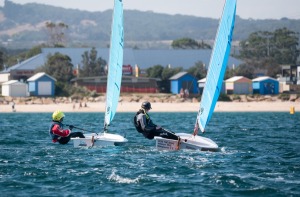 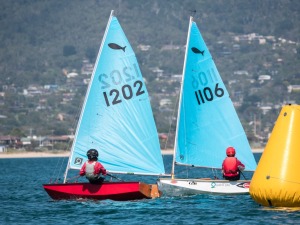 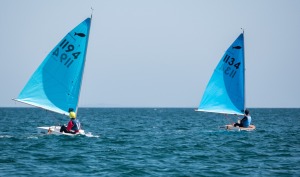 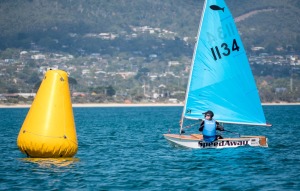 It was a terrific weekend at Safety Beach Sailing Club for our 2017 Victorian State Titles on 11th and 12th March. Sun, sailing, fun and lots of racing meant for an enjoyable weekend for all of our sailors and families.

All up we had 54 sailors representing 9 different sailing clubs from as far away as Bendigo and Gippsland. Last year we had a couple of Opti sailors join us, one of which went on the win the overall Open division. This year we had three Open Bic sailors join Open fleet: Orlando Yen, Ben Hodder and Oliver Hordern.

Both fleets launched in light winds on Saturday morning. On the open fleet course, race 1 got under way with 38 on the start line and a light northerly breeze. First around the top mark was Ed Warner followed closely by Taj Duff, both having taken the right side of the course. As they rounded the mark though the breeze completely died, and the race was abandoned.

Race 1 was restarted as the light breeze returned. Having seen Ed and Taj benefit by going right, Hamish and Kate having got a good start, set off towards the right corner of the course on the first beat. Half way up the beat the wind shifted left and around the first mark came Ed followed closely by Sally Danks and then Lucus Schey. There were some new faces at the front too with Lucus James, Cassie McCarthy, Daniel Grimshaw and Jessica Viza in the top 10 as they headed down to the jibe mark. As they crossed the finish line it was Ed followed by Sally and Lucus Schey, but unluckily for Ed he was OCS.

Before race 2 got underway the RO swung the course to the left to reflect the new wind direction. This time Hamish made the most of his good start leading the whole race to finish ahead of Ed and his brother Tom Warner. Again the wind shifted left and the RO had to swing the course around again. Race 3 followed a similair patttern with Hamish off to a good start and leading the way, this time with Sam Backwell finishing in second, Ed in third and Kate Evans 4th. This brought an end to the days racing for open fleet, a day for the light air sailors with all races completed in about 5-8 knots.

Novice fleet meantime managed 4 races on the Saturday. The Novice course was close to shore and consisted of a simple triangle for each race. Sunny Derham won the first two races, Oliver Knight the third and Campbell Matthews the forth.

Overnight the wind picked up and turned westerly, and as the sailors arrived for the mornings races it was 25+ knots at South Channel. Novice racing was postponed but the Open fleet headed out to a course fairly close to shore and as race 4 started it was about 15 knots gusting 18 or so. Having started from the pin end Hamish rounded the top mark with a lead of about a minute from Sally, Ed, Taj, Ben Hodder and Sam. On the second beat Ed and Sam moved up into 2nd and 3rd respectively and finished that way with Hamish hanging on to 1st.

For race 5 the wind was a similair strength on the start line, but the wind was starting to get lighter at the top of the course. Taj Duff  had a terrific start and rounded the top mark 10 seconds clear of Frank McKenna and Ben. On the second beat Taj maintained his lead, Ed moved into second, and Frank was in third ahead of Hamish, Sally and Tom. They finished in that order. It was great to see the Gippsland sailor win his first State championship heat having lead the whole way.

By race 6 the wind had lightened off to about 10-15 knots. Hamish and Ed both started pin end in the front row and rounded the top mark in that order. Next around was Frank, Sam, Ruby, Tom and Oliver Hordern. At the top mark for the last time, Hamish had a 45 second lead over Ed, with Frank, Sam and Tom another 30 seconds back. At the finish it was Hamish followed by Ed, but Tom had made 2 places on the run to finish 3rd, followed by Sam, Frank, Oliver and Jade Telford in 7th.

With the breeze continuing to lighten off, the open fleet returned to shore for a much needed break but still with one more race scheduled.

Novice fleet then headed out to complete their 3 remaining races. As they headed out the wind dropped to 5-10 knots which was perfect condtiions for the novice sailors. Race 5 was won by Leo Barnes after getting a fantastic start, race 6 by Sunny and the final race by Jack Noakes. So with 5 different winners over 7 races it was anything but predictable with all the kids getting a go in the top 10 at various points during the races. The final results in the Novice Division then was Sunny Derham 1st, Jack Noakes 2nd, Leo Barnes 3rd, Chloe Warner 4th, Oliver Knight 5th.

With 3:30pm being the latest possible warning signal, the AP was lowered at 3pm with barely any breeze. After 15 minutes a 5 knot breeze filled in so it was a scramble for everyone in open fleet to get to the start line as it became clear the RO was going to run the final race. Sure enough a few seconds before 3:30 the class flag went up and Open fleet were into a start sequence. Tom, Joel Schey and Misha Campbell got cracking starts and quickly opened up a solid lead. A lot of the front runners had found themselves burried in the 2nd and 3rd rows at the start and were well back. Joel continued on to win his first race, Hamish 2nd and Misha finished a superb 3rd, while Tom having crossed the finish first was unfortunately OCS.

The Junior Division winners were Sam Backwell 1st having dominated the division with 6 firsts in 7 races, Cassie McCarthy in 2nd and Lucas James 3rd.

Jarvis Harrop won the Presidents Award, and Campbell Cowell the Most Improved.

Well done to all the sailors who took part, it was great to see so many first time novices sail as well as those stepping up from novice to be first time open division sailors. Thanks to Safety Beach Sailing Club, all the volunteers on water and off, the RO's who did superbly to get all 7 races done, to the MSA committee members and to all the minnow families who helped make the weekend a success.