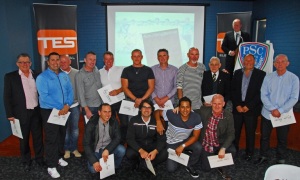 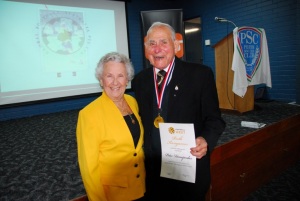 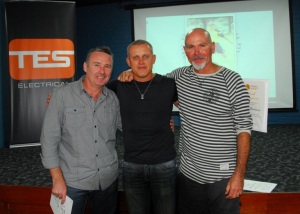 THE 20th anniversary celebration of the Perth Kangaroos stunning triumph in the Singapore Premier League received a special kick-off when the Emeritus Archbishop of Perth, Barry Hickey, gave his formal blessing to the night’s proceedings at Dorrien Gardens on June 19.
After that, the evening was a breeze for the function’s Master of Ceremonies, John O’Connell, who took the assembled players, their partners, coaches and supporters on a trip down memory lane.
The Kangaroos won the S-League in 1994 with a remarkable unbeaten run that saw them win 17 and draw one of their 18 games.
It was a history-making first victory by an Australian team in an international league.
Roos coach Gary Marocchi paid tribute to his players, assistant coach Mickey Brennan revealed some amusing anecdotes of ‘life’ off the pitch, while the team’s inaugural captain, Craig Naven, emphasised what a giant stepping stone the victory turned out to be with many of the Kangaroos going on to play for the newly-formed Perth Glory in the National Soccer League in 1996.
Eddie Lennie, Dave Mortimer and Andy Gorton, the three referees who took charge of the Roos home games, joined in the night’s celebrations. Former World Cup whistler Lennie said that officiating in the S-League had been valuable international experience for all the officials.
Former Perth Glory owner Nick Tana, whose company Arena Investments came to the financial rescue of the Kangaroos after the founding company Global Football Australia had withdrawn their support, was made a special presentation on the night.
Certificates from Football West - and copies of a special commemorative booklet compiled by Football Hall of Fame Committee members Richard Kreider and Mel Moffat - were presented by Football West director Sherif Andrawes to the players and their support staff.
Among the players to receive certificates were brothers Gareth and Craig Naven, Paul Strudwick - who was the team’s top scorer with 16 goals - Paul McVittie, Alex Cummings, Taki Nicolaidis, Dale Wingell, Sean Lynch, Joe Marrapodi, Vince Tana and Ray Marinovic, who travelled from his home in the Phillipines for the event. Other Roos players were either unavailable, overseas or interstate.
Team manager Peter Dimopoulos, looking sprightly in his late 80s, was also honoured.