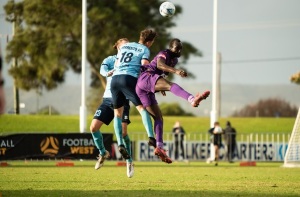 Round Eight of the NPLWA - Men's competition is headlined by the sixth annual Regional Festival of Football fixture between Perth Glory and Sorrento.

The yearly game between the pair has become a mainstay on the NPLWA season calendar, with Busselton's Barnard Park hosting the game for a second time. Three years ago Glory beat the Gulls 5-2.

The Regional Festival of Football will mark a special year for Busselton City, who are celebrating their 100th anniversary. As part of the week-long event, there are coaching and referee workshops, open training sessions for boys and girls, as well a local clash between Vasse Hawks and Busselton City preceding the NPLWA - Men's clash at 3pm.

The importance of taking football to the regions isn't lost on Perth Glory NPL midfielder Andrew Maranta, who played his junior football with South West Phoenix.

"It's definitely important for WA football. Coming from Bunbury myself, you see Perth Glory, an NPL side, come down and the local fans love it," he said.

"It's not just a big city sport, the communities are crucial because there are so many good players out there coming through and it's brilliant for the young players to come out and see that next level up and have something to aim for. It's a very good thing for football to have these community games.

"I went up to Geraldton (for the 2021 Regional Cup game) and from memory it was the start of a good run we had last year. It was good timing for us and brilliant to get away with the boys and the coaches, because that's where you can build that team spirit and brotherhood.

"There's obviously a few different players this year, but the away trips are something we love because it's good to get out to a different community and see different people coming out from those areas."

Glory, who will hold an open training session from 3pm today at Barnard Park, go into Saturday's clash in good shape and on an unbeaten run of five matches, having lost just once in 2022. They earned a 2-2 draw in Tuesday's catch-up game against current NPL leaders Bayswater City and Maranta, who scored his first goal of the season in that game, is pleased to see many of the U20s team from last year stepping up and taking their NPL opportunity.

"Bayswater are a good team. You saw why they're in and around the top after coming off a good win over Floreat," Maranta said.

"Going into it, we knew it was going to be a battle and we were happy to come away with a point, even though we had chances to take all three.

"It's been a good start to the year. It's been a little bit hard because we've had players coming in and out, but it's been great to see some of the older boys making their A-League debuts.

"For a few of us older boys playing in the youth team, these are proud moments to see your best mates playing on the biggest stage possible in Australia. It's fuel for us to keep working harder and getting better.

"But whoever has stepped up (from the U20 side) has done their job and at the moment we've only lost one game. They're all putting in a shift, holding their own and not looking out of place at all. You can see that with the results we've been getting."

As well as facing off in the five previous Regional Cup matches - with games also held in Kalgoorlie, Geraldton twice and Albany - Glory and Sorrento also met in last year's Top Four Cup semi-final with the youngsters coming out on top after extra-time. Maranta believes it will be another strong challenge against a likely finals rival.

"Sorrento are a very good side and we've had some good games against them over the past couple of years," he said.

"Like us, they're good going forward and if you give them chances, they're going to take them. You always know you're going to be in a good fight on the pitch and you've seen that in the previous matches. We're expecting them to be up for it and I think it will be another good game as usual."

Sorrento have started the year strongly with two Chris Jackson goals in Wednesday’s 2-1 catch-up win at Cockburn moving them second and a point off top spot.

The Gulls have continued with the form which saw them finish third in the league last term, despite a change of coach as Trevor Morgan returned to Percy Doyle Reserve to replace Jamie Harnwell. Scott Witschge hopes the run can continue as they look to reverse last year’s 1-0 regional defeat in the Mid West.

“Last season really set a platform for us. We figured out our identity and Trev hasn’t come in trying to change that,” Witschge said.

“He’s brought in the right guys in the off-season who have similar mindsets to the rest of the group which brings results.

“It was good to turn in a professional performance (on Wednesday) and come away with the three points. Some of us hadn’t even noticed the potential climb up the ladder because we’ve just been out there enjoying what we do.

“The boys love this trip every year. If we can stay organised and disciplined at the back then we have the guys to score at the other end and that’s what we have to do to bring the regional trophy back home to Percy Doyle.”

Elsewhere in Round Eight, leaders Bayswater travel to sixth-placed Stirling Macedonia with just two points separating the top six sides in the division.

Ian Ferguson's side edged past Gwelup at the weekend but know a win could take them top if other results go their way, having played two games fewer than the pacesetters. Bayswater will look to extend their unbeaten run to seven.

Floreat meanwhile will look to bounce back from last weekend's 6-1 defeat to Gareth Naven's league leaders when they host mid-table Inglewood United, who are looking to claw themselves into the finals mix with three points.

Third-placed Perth RedStar are also in that cluster of teams at the top and they travel to bottom side Balcatta Etna, who are still chasing their first points of the campaign.

Four of the bottom five teams also meet this weekend as Perth SC and Gwelup Croatia seek their first wins of the season with tricky away fixtures against Cockburn City and Armadale respectively.