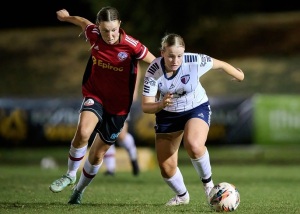 Round Seven of the NPLWA - Women's competition features a repeat of the 2022 Night Series final as Balcatta Etna host Perth RedStar at Grindleford Reserve on Sunday afternoon.

Balcatta were runners-up back in March after a 4-2 extra time defeat to Northern Redbacks, who were playing their final fixture as Redbacks prior to the announcement of their merger with men's side ECU Joondalup to become RedStar.

Whilst Carlos Vega Mena's side are since top of the league with a 100% record and five points clear of the rest, Balcatta have taken a little while to get going following defeats to Perth and MUM FC in the first two rounds. They did get their first three points a fortnight ago at home to Curtin, but have since had another Covid postponement against Fremantle City last week.

"Another postponement was frustrating to say the least," said Balcatta full back Monique D'Opera.

"Unfortunately, our circumstances have resulted in us only playing three games in six weeks, so building momentum has been quite tough. It places an additional challenge on our game having to take on teams that have had more opportunities to practice, learn and retain match fitness.

"The win against Curtin was great for our confidence. We worked hard, identified the areas of improvement, and that game was a display of our hard work being rewarded.

“We responded well to going 1-0 down and demonstrated what we are capable of as a team. Our ladder position is a reflection of our games played rather than our performances."

D'Opera scored her first ever NPLWA goal in the Curtin win, while there was also encouraging signs for new recruits Monique Prinsloo and Mia Yeo who both netted. Both, along with Tayna Campos, Aaliyah Jorquera, Georgia Cawley and Lauren Conitinibali, have all integrated into the first team set-up since arriving this off-season.

The Balcatta defender believes the team chemistry is coming together nicely despite the disrupted start to 2022 and says the extra depth will be key later in the season.

"I do think it has taken some time. There are multiple factors at play, but it's nice to see the new signings finding comfort in playing next to each other and executing what we've been working on," she said.

"Monique (Prinsloo) got on the board twice which is positive for her, and I know her confidence has grown because she loves scoring goals. I think it gives us some reassurances that what we're doing is right and if we keep trusting the process then the results will come.

"There's no doubt about our work rate, we play for each other and in games we fight until the end, but to do that and play well, and have that external result is the sense of achievement we want to take forward."

"Squad depth is going to be vital this season, not only for Covid reasons, but now we also have the added challenges of rescheduled games and risk of injury. But we are ready for the challenge, it will be tough, but we will thrive off it and will be ready for whatever stands in our path.”

Balcatta face a stiff test as they look to ignite their campaign when unbeaten league leaders RedStar arrive at Grindleford Reserve this weekend.

Whilst D’Opera acknowledges it will be a tough challenge, she says the mood is good ahead of the game and that the team will be focused for Sunday’s encounter.

"Having to play one week, then rest the following week, it's quite difficult to find momentum but the attitude and intensity at training is the best it's been in the leadup to RedStar," she said.

"We've had some time to reflect on key aspects of our game and this weekend will be another opportunity to implement it and come away with a result.

"RedStar have proven they're a strong team physically and technically and are well-structured in both attack and defence, given the experience have in their squad.

"The key to success for us will be our discipline in defence and organising our defensive press, which we demonstrated well in the Night Series Final and we will need to bring that again for the duration of the game. The pressure will be on to capitalise on our opportunities in front of goal and I have every faith the girls can get the job done."

Round Seven starts tonight. Third-place Fremantle City will hope to apply some pressure on the top when they face Hyundai NTC at E&D Litis Stadium. The youngsters are without a win since Round Two, but know three points will put them back into the finals positions.

Tonight's other scheduled game between Murdoch University Melville and Perth SC has been postponed.

On Sunday, Subiaco could also move into the top four depending on Friday’s result when they host Curtin University at Rosalie Park. Greg Farrell’s side won their last home game 2-0 at home to NTC, while the visitors will aim to pick up their first points of the season under caretaker coach Les Cavill.