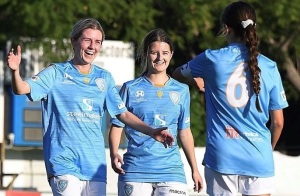 Perth SC were dominant against Subiaco. Photo by Rob Lizzi

Jaime Duncanson scored a first-half hat-trick as Perth SC won 5-0 won against Subiaco to go second in the NPLWA- Women's competition after Round Six.

The Azzurri join Fremantle City on 10 points and hold a better goal difference after Sunday's win, but both still trail leaders Perth RedStar whose 100% record sees them five points clear at the top.

After scoring 12 times last season, Duncanson found a first half flourish to open her tally for season 2022. She was in the right place at the right time on five minutes, as Zoee Spadano's shot deflected into her path before she volleyed in via a slight deflection.

Duncanson scored again on nine minutes when Ella Lincoln rolled her marker and delivered the perfect assist for the forward to finish from close range.

Phoenix Brownlie's effort for Subi hit the bar moments later, but Perth were in a ruthless mood and made it three inside quarter-of-an-hour as Spadano got forward from midfield and finished left-footed past Zara Board.

Abbey Meakins' free-kick was well saved by Board, but she was powerless to prevent Duncanson's hat-trick goal on 42 minutes as she ran through on goal to score following a lovely one-two with Spadano.

Lincoln flashed one wide of the post as the home side continued to press and a fifth did arrive in spectacular fashion past the hour mark when Spadano chipped in brilliantly from outside the box.

Brownlie's cross evaded Samantha Narra late on as Subi searched for a consolation, but Perth's strong first half was the difference as they

The hosts made a fast start at RedStar Arena with Sarah Carroll and Olivia Wood both testing Monique Todd inside the first 10 minutes, before the opener did arrive after 15 minutes.

Walsh used her trademark speed to burst clear of the MUM FC defence before finishing into the top corner as she netted for a fifth straight league game.

Six minutes later it was 2-0 as Carla Bennett poked a pass forward into the path of Carroll who rifled home from inside the area.

Walsh then scored her ninth in six games this season to take a clear lead in the Golden Boot race after collecting Carroll's pass prior to half time.

Poppie Hooks had a header on target blocked while Walsh may have completed a hat-trick later in the half, but all the damage was done in the first half as RedStar went five points clear.