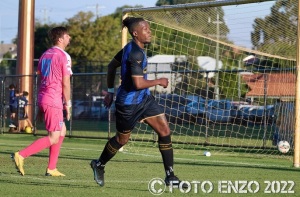 Ndumba Makeche turns away after scoring one of his two goals for Bayswater City against Floreat AThena. Photo by FotoEnzo

Bayswater City surged to the top of the NPLWA - Men's competition after a crushing 6-1 over Floreat Athena on Saturday afternoon.

The statement result moved City level with Athena at the summit, but a large goal difference swing put Gareth Naven's side seven goals clear with a game in hand.

It was Baysie's big three up top who did the damage with Gordon Smith, Ndumba Makeche and Jon Stynes all scoring braces to send a warning to the rest of the division.

Smith got the first on nine minutes when Sam Mitchinson's cross from the left was missed by Chris Saldaris and the Scot was left with a tap-in.

Riley Woodcock equalised for Athena on 27 minutes when his free-kick went in via a Jason Mirco deflection, but Bayswater were on top and would take a stranglehold on proceedings with two goals in first-half added time.

First, Makeche coolly sent Jason Saldaris the wrong way from the penalty spot before Smith pulled back for Stynes to make it 3-1 against his former side.

Goalkeeper Saldaris was keeping his side in it as he saved from Makeche and Stynes early in the second half, but there was nothing he could do to stop the fourth on 60 minutes. Makeche intercepted a pass on the right and drove towards goal before squaring for Smith, who completed his brace.

Makeche was then the provider for Stynes' second as his shot clipped off the underside of the bar and in, before the former Perth Glory striker rolled home to complete a half-dozen and extend Bayswater's unbeaten run to five.

The home side were unbeaten in three and in decent form coming into Saturday's game and they went ahead as Harry O'Brien scored at the second attempt for his first of the season.

Daniel Robinson may have made it two, but Armadale instead levelled five minutes later when Adriano Jelenovic followed in Angel Andres’ shot to net for a second straight week.

Andres then stepped up to the penalty spot to put the visitors ahead but holding their lead would become tougher when Isaac Koomson was shown a red card for an off-the-ball incident after the half-time whistle.

The Cockerels were able to capitalise and make it 2-2 on the hour mark when O'Brien steered home Anthony Skorich's flick-on for his second.

Remarkably, Armadale then went down to nine as Yousri Gharshallah was shown a straight red card and back-up Alex Fisher came on for his senior NPL debut.

Jesse Lazzaro and Igor Cvijanovic both tested Fisher in the final 20 minutes, but they couldn't despite him despite a wave of late pressure as the spoils were shared.

Sunday's fixture saw Stirling Macedonia move back into the top four as Calvin Whitney's penalty late in the first half gave them the points in a 1-0 win at Gwelup Croatia.

The hosts started brightly and could have scored twice in the first 20 minutes. But Sebastian Da Silva and Samuel Dweh were both denied by good one-on-one saves from James Bosdet.

Whitney then sent Cyril Sharrock the wrong way from the penalty spot on the stroke of half time as Stirling's push for a finals spot continued.

Gwelup continued to create chances after the interval. Kade Fearnall tested Bosdet's reactions again, while at the other end the home side needed to put bodies on the line to prevent Ian Ferguson's side from scoring a second.

Dejan Spaseski forced Sharrock into a fingertip save late on as they pursued a second, but one was enough for Stirling to win for a fourth time in five NPL matches.

On Friday, Perth Glory stayed in the mix for a top four place as Christian Belladonna's second-half goal gave them a 1-0 win over bottom side Balcatta Etna.

Amir Ajan hit the bar inside six minutes, while at the other end Ciaran Bramwell was twice denied by Dom Salvoldelli.

The breakthrough came on 70 minutes when Salvoldelli saved from Joshua Anasmo, but the ball broke into the path of Belladonna who registered a first senior NPL goal.

Jonathan Corness' header was closest Balcatta came to an equaliser as they remain at the foot of the table and without a point from five games.

Sorrento's home fixture with Inglewood and Perth RedStar's game against Perth SC were both postponed.