Bayswater out to close gap on leaders 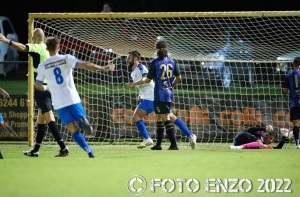 Floreat defeated Bayswater 2-1 in the Night Series in February. Photo by FotoEnzo

Round Seven's match of the round in the NPLWA - Men's competition pits fourth-placed Bayswater City against leaders Floreat Athena with just three points separating the pair.

Floreat drew 2-2 away to old foes Perth SC on Tuesday in a catch-up game from Round One. The result took them a point clear of Perth RedStar.

On Saturday they face an in-form Bayswater side who are unbeaten in four and know that three points on Saturday would pull them level on points with Vas Vujacic's side having played a game fewer.

Winger Jon Stynes arrived from Gwelup Croatia in the off-season after two years at the Croatian Sporting Complex and says things are starting to come together nicely at Frank Drago Reserve.

"At the start of the year, we had a few different players come in and a couple of defeats in pre-season, but not necessarily because we weren't playing well, it was more that we weren't quite familiar with each other," he said.

"But now we're a few games in and we're starting to click. It's good to get a few wins under our belt and I think we can go up against anyone in the league with the team we have.

"The thing for us is we want to be the team who are being chased and leading the pack and that's obviously where we want to end up.

"With our loss to RedStar, obviously we would have rather played them now we're beginning to click, but we'll get to play them again later in the season. So, we're happy to go under the radar for now and chip away a bit, and hopefully some teams will slip away, we can keep our consistency going and we'll see where we end up."

Bayswater are a powerhouse name in WA football and have been particularly strong in the NPLWA, winning three of the first four league titles after the competition was formed in 2014. But they have found themselves in unfamiliar territory in recent years and Stynes hopes the current squad can help restore City back to the top table again.

"Even when I was younger coming through ECU Joondalup in my junior years, Bayswater were always at the top of the league. They went on that run (of winning leagues) when I came back from the UK, so they're just a team who have been prolific and are used to winning," he said.

"It's been a bit different the past two years to see them down there and outside of the Top Four, so what we want to do is get them back to that high level.

"The standard here with the coaching and facilities is excellent and it's a very professional setting. Gareth [head coach Gareth Naven] and John [assistant John Walmsley] set up good sessions and have everything ready to go for us, which makes it easy to come in and work hard. So it's a great culture we've got there, and we want to give back to the club."

Stynes will no doubt hope that can start this weekend against his former club Floreat, where he enjoyed plenty of success and lifted two State Cups in 2016 and 2019.

"It’s always fun to come up against those boys. There's always that bit of extra spice and healthy competition when you're playing against your old teams. There’s still a lot of the same boys there and I’m looking forward to it," he said.

"The main thing for me is how we start. If Floreat go up, they have so much experience and know how to handle a game. That happened in the Night Series where we lost an early goal, and those boys know how to keep possession and defend well.

"So, I think the focus for us is to start well, hopefully get an early goal, and then they have to come out at us rather than being able to manage the game."

Round Seven begins tonight when Perth Glory host Balcatta Etna at Crazy Domains Stadium. A win for Glory will move them up to third ahead of Saturday's games, while Michael Johnson's side are still chasing their first points of the campaign.

Cockburn City host Armadale on Saturday afternoon with both sides looking for three points to move them towards the top half of the division. Mirko Jelicic's side are unbeaten in three in all competitions with a 3-0 win over leaders Floreat last time out, while the visitors will want to hit back from a 4-1 defeat to Perth RedStar last weekend.

On Sunday, Gwelup Croatia will also seek their first NPL win of the season when they meet neighbours Stirling Macedonia, who weren't in action last week but their most recent league clash was the stunning 4-3 win at RedStar, having been 3-0 down.

Sorrento's clash with Inglewood United and RedStar’s game against Perth SC have been postponed. Sorrento travel to Cockburn next Wednesday for their rescheduled Round One fixture.