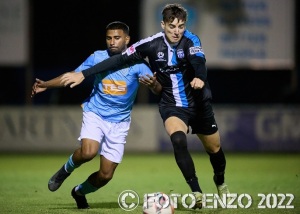 Perth and Floreat drew their rescheduled game at Dorrien Gardens. Photo by FotoEnzo

Floreat Athena have moved a point clear at the top of the NPLWA - Men's competition following an entertaining 2-2 draw with Perth SC at Dorrien Gardens on Tuesday.

The highlight was Paul Zimarino gatecrashing the Goal of the Week vote with a stunning opener for Perth.

Ludovic Boi led Athena's response with a double either side of the break, before Federico Achilli earned the Azzurri a point with a header 15 minutes from the end.

Athena are now a point in front of Perth RedStar and three clear of Sorrento and Bayswater City.

The game was the rescheduled Round One fixture which was postponed due to Covid.