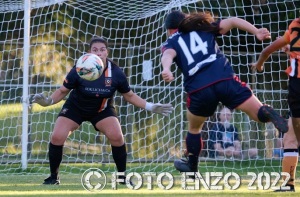 Subiaco registered their first win of the season and moved to within a point of the top four with a 2-0 win over Hyundai NTC in Round Five of the NPLWA - Women's competition.

It was a first three points since Greg Farrell took charge a week before the season started and only Subi's third league win in the NPLW era.

The home side started well at Rosalie Park with Phoenix Brownlie testing Lily Bailey twice in the opening 10 minutes, before Anna Powell forced Zara Board into a save at the other end.

Subiaco would take the lead on 26 minutes though. Frankie Murray spotted Bailey slightly off her line from a free-kick and the former ECU Joondalup player lifted the ball over the goalkeeper into the net for 1-0.

Board was kept busy by her former side as Grace Johnston forced her into two more saves before the break. The second save was the pick of them as the goalkeeper got low to her right to palm an effort away from goal.

And those saves proved more important early in the second half when Subiaco doubled their lead. This time Brownlie would get her goal as she carried the ball down the right and lobbed Bailey for her first goal of the campaign.

Tanika Lala had two decent chances in the final 10 minutes to pull a goal back, but both were saved again by the outstanding Board as Subiaco kept a second clean sheet this season.

Elsewhere on Sunday, Monique Prinsloo scored twice as Balcatta Etna came from behind to win their first game of the season 4-1 against Curtin University at Grindleford Reserve.

The hosts had the better of the first half chances overall, but both goalkeepers were called into action to keep the first half goalless. Tayna Campos brought out a good low save from Stacey Cavill, before Gabby Dal Busco stood tall to palm Dakota Van Vugt's effort behind for a corner.

Curtin had never scored in the five previous clashes between the sides, but they gave themselves a real shot of winning when they struck the opener on 59 minutes. Sophie Preston laid the ball back for Danielle Suckling to take a touch and rifle into the top corner for her first senior NPLW goal.

But the lead barely lasted a minute as Balcatta scored twice in as many minutes to turn the game on its head. Cass Harvey threaded a pass through for Prinsloo who took a touch to round the goalkeeper and slot into an empty net from a tight angle.

Monique D'Opera then gambled on a long ball forward to sneak in behind Curtin's defence and poke home to complete a quickfire comeback with her first senior NPL goal.

Balcatta kept the foot on the pedal and raced into a 3-1 lead soon after. Mia Yeo burst down the left and provided an excellent assist for Prinsloo who doubled her tally for her first goals since joining from NTC in the off-season.

Curtin tried to pull one back as Van Vugt drove into the area and forced Dal Busco into another block, but substitute Yeo rounded out an impressive cameo off the bench as she added a goal to her assist by finishing Alanah Veroni's cross.

On Friday night, Fremantle City inflicted a first defeat of the season on defending champions Murdoch University Melville after a 3-1 away win.

They got off to a fast start as Erin Siah threaded a pass through for Jess Darmago to slot past goalkeeper Monique Todd on four minutes.

Darmago then made it 2-0 from the penalty spot moments later, but MUM FC's young side have shown character in their first three outings and pulled one back after 13 minutes when Samantha Mathers got on the end of Elysse Shore's cross.

But Jamie-Lee Gale hammered home at the other end just past the half hour mark and that was the end of the scoring, as City capitalised on a Covid postponement between Perth RedStar and Perth SC to move into second and close the gap on leaders RedStar to two points.