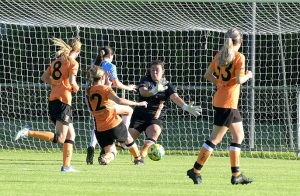 The bottom two sides of the NPLWA - Women’s competition meet on Sunday afternoon as Balcatta Etna host Curtin University in a Round Five clash at Grindleford Reserve.

Night Series runners-up Balcatta have suffered league defeats to Perth SC and MUM FC, while Curtin have also had a tough start, losing to the current top three sides.

Like many clubs, there has been change in the playing roster for Curtin this off-season. One constant throughout the NPLW era, however, has been goalkeeper Stacey Cavill who is in her third year with the club.

Cavill believes there is plenty of optimism in the squad despite the wait for their first points of 2022.

“We’ve pretty much started from scratch again for the start of this season with a lot of new players trying to understand how we want to play,” she said.

“Besides the RedStar game, we’ve been pretty competitive. I think we’re getting there. We’re starting to click as a team a bit more, so hopefully this weekend we can get a bit closer again.

“We had a big pre-season and did a lot more fitness work than we have previously, which should help as the season goes on, and we’ve been working on our passing and trying to work under more pressure.

“When we played Perth, there was a really good vibe in the group, and I hope we can replicate that on Sunday and play our game well. All I hope for our team is we stay focused for the 90 minutes and if we can get a good result, then I’ll be really happy.”

Cavill was in fine form last time out against Perth, making several fine saves to keep Curtin in the contest before eventually being beaten by a late Abbey Meakins chip.

She will hope to continue to lead by example, not just with her performances but also as an experienced figure in a relatively young Curtin squad.

It is a role she embraces, although she admits goalkeeping isn’t for the faint-hearted.

“I think you have to be half mad to be a goalkeeper!” she joked.

“It can be scary diving at people’s feet, blocking the ball with your face and I’ve had my fair few injuries. But all you can do is trust your physios, your coach and yourself. I’ve been lucky to always have supportive networks within my teams and my family.

“I’m a vocal goalkeeper and I do talk a lot. Sometimes I may overdo it a little and be a bit too passionate, but most of the time it’s just about helping my team. It’s also partly to keep me focused as well.

“As goalkeeper, you see everything, whereas sometimes outfield players can be focused on a small area on field. So, I try to open their mind and talk to them, and feel if you have a good communicating goalkeeper it helps across the team.”

Cavill had a passion for goalkeeping from a young age, which started around age five or six when took her turn between the sticks during a match.

As an Arsenal supporter growing up, one of her favourite players was David Seaman. She also praises Matildas role models Lydia Williams and Melissa Barbieri as influences, as well as former WA State Team goalkeeper Tracey Wheeler.

The shot-stopper has gone on to be part of the Perth Glory set-up, while she also has six international caps – with the Philippines.

“It’s probably the weirdest way to get onto a national team. But I was on Twitter and I saw they were training in California ahead of the Women’s Asian Cup in 2018,” Cavill said.

“I just messaged saying I was half-Filipino through my mum and that I’d played college soccer at a high level and sent some highlight videos. Next minute, I was on a phone call with one of the scouts for a few hours, eventually flew over for another training camp, and a month-and-a-half later I was at the Asian Cup in Jordan!

“It was an amazing experience and I was actually invited to go to this year’s Asian Cup and join them. But I unfortunately couldn’t accept it because of work commitments and Covid.

“You kind of kick yourself because these opportunities can be once in a lifetime, but hopefully I’ll get the opportunity again in the future. Hopefully, I’ll be able to have a good NPLW season and show (Philippines head coach) Alen Stajcic that I’m still available for selection.

“I’m super proud and honoured to represent the Philippines. It’s definitely opened my life up in terms of travelling for football, meeting new people and having the chance to play overseas.”

League champions MUM FC are one of two unbeaten sides after a win and two draws so far, while City played out a goalless stalemate at home to Perth SC last Sunday, a result which helped neither team’s chances of keeping pace with leaders Perth RedStar. But Friday’s fixture provides an opportunity to make inroads after the other top four meeting between RedStar and Perth was postponed due to Covid.

The weekend’s other game is on Sunday afternoon as Subiaco look to bounce back from a heavy defeat to RedStar last time out when they welcome Hyundai NTC to Rosalie Park. The youngsters had their clash with Balcatta postponed last week, but are unbeaten in two after a win over the Azzurri and a draw with MUM.