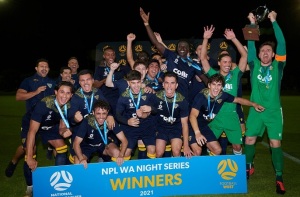 The Men’s NPL Night Series begins later this month with holders Inglewood United kicking off with a home clash against Armadale.

The pre-season competition will see the 12 teams split into two groups of six. The sides will play each other once, with the winners of each group facing the runners-up from the opposite group in the semi-finals on Sunday 6 March.

The final takes place on Saturday 12 March at a venue to be decided.

Joining Inglewood and Armadale in Group A are league champions Perth SC, Balcatta, Sorrento and Cockburn City, three of whom have changed their coaches during the close season.

Marc Wignell has stepped up from assistant to replace Ramon Falzon as head coach at Perth, while Sorrento and Cockburn have turned to former coaches in Trevor Morgan and Mirko Jelicic, respectively. Balcatta have Michael Johnson in charge - he was confirmed as permanent head coach just days before the final league game of last season after seven matches as interim.

Another side with a new head coach are Gwelup Croatia, who have appointed Mitch Prentice. Gwelup get under way against Perth Glory, with ECU Joondalup taking on Bayswater City.