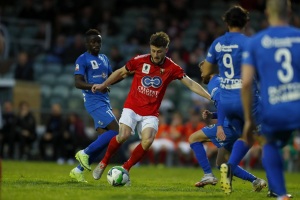 Adelaide Olympic scored three goals in the final 20 minutes to send ECU Joondalup out of the FFA Cup in tonight's Round of 32 clash at Dorrien Gardens.

This was ECU's first appearance at the national stage and their 3-0 loss, coupled with Floreat Athena’s exit to Adelaide United on Sunday, means A-League side Perth Glory are WA’s final representative.

Olympic, meanwhile, advance to the Round of 16 for the second time in the past two editions at the expense of a NPLWA side following their 4-3 defeat of Floreat in 2019.

The South Australian side started the better, with Paul Wilson heading a corner over the bar, before Michael Cittadini broke the offside trap and dragged an effort wide when through on goal.

Jason Konstandopoulos looked most lively for the visitors and he brought out a fine save from Johnny Perkins, but the 2020 NPLWA winners worked their way back into the clash.

Ellis Healing fired a free-kick over the bar, before a Chris Harold finish from close range was ruled out with Shane Cassidy penalised for a foul on goalkeeper Joshua Kavenagh.

Harold then surged down the left with his pull back narrowly evading Declan Hughes, while Healing shot wide from Tommy Amphlett's lay-off as the half ended goalless.

Chances were less frequent after the restart. Healing put another free-kick over and Hughes was just wide of the post. Olympic had shouts for a penalty turned down, while Jason Konstandopoulos blazed a good opportunity over.

But Adelaide took control of proceedings with 20 minutes to play, with Ioannis Simosis' introduction key. The striker inadvertently set up the opener with an attempted scissor-kick which he scuffed across goal to Christos Pounendis, who showed him how it was done with an acrobatic volley past Perkins.

Simosis then led the charge as Cittadini's cross landed at the feet of Fausto Erba at the back post. The NPLSA's joint-second top scorer stood up Ryan Lowry near the bye-line before brilliantly curling his shot in off the post.

Three minutes from time Cittadini was brought down by Perkins and Simosis smashed the penalty past Perkins to complete the scoring.

- Tonight’s match was attended by the parents of ECU Joondalup striker Danny Hodgson, who remains in a critical condition at Royal Perth Hospital.

The ECU players warmed up in DH7 t-shirts in tribute to Hodgson, with 50% of the gate profits being donated to the Englishman.