Perkins message to ECU: Let's do it for Danny 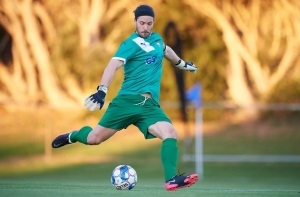 ECU Joondalup must try to put the emotion of the past three weeks to one side as they prepare to face Adelaide Olympic in the FFA Cup at Dorrien Gardens on Wednesday night.

The Jacks are the last remaining NPLWA team in the competition following Floreat Athena's extra-time loss to Adelaide United in Sunday's Round of 32 clash.

This should be one of the biggest nights in ECU's recent history. However, the build-up has been overshadowed by the incident earlier this month which has left striker Danny Hodgson fighting for life in Royal Perth Hospital.

ECU captain Johnny Perkins says the squad are determined to rally together for their team-mate and friend Hodgson, the NPLWA Golden Boot winner in the team's title-winning campaign of 2020 and a player who scored in every round of the competition to guide them to the national stage this year.

"There's a real sense of family in the club with what's happened. Everybody is absolutely devastated. He's on our minds and in our hearts and we want to go out and put in a good performance for Danny," Perkins said.

"We're devastated he's not going to be playing after the past two years he's had at ECU and the goals he's scored for us. He should be front and centre on Wednesday night and unfortunately that's not the case, so we have to make sure we put in the best performance we can for him."

Perkins said the outpouring of love and support for Hodgson has been warmly felt at ECU.

"It was an emotional night the other night (at the Danny Hodgson benefit match with Perth Glory) and football was secondary because it was all about Danny, and it was a poignant night because we're all thinking about him, his family and his partner every day.

Of course, for 90 minutes on Wednesday it will be minds on the football as ECU look to extend a season which saw their league title defence peter out.

Opponents Adelaide Olympic also recorded a mid-table finish, which means both teams could have a point to prove, according to Perkins.

"I think overall we feel we've underachieved (this season) with the players we have in our squad. We probably just didn't perform on enough occasions with the fact we won 10 games, but lost 10 too," the goalkeeper said.

"There were days when we didn't take our chances and days when we conceded sloppy goals. At stages we played some good football and were unfortunate with some long-term injuries, but that's no excuse with the calibre of players we have.

"It looks as though we (ECU and Adelaide Olympic) have had similar seasons, but a lot of that can go out the window with it being a one-off tie. I'm expecting them to come over and really go for it, why wouldn't they? And I'm also expecting us to do that as well.

"It's definitely a privilege to be playing in these types of games and is not something we take lightly. We're delighted to be playing on Wednesday, we'll be really up for it, and we'll be champing at the bit to get out there, put in a good performance and hopefully get a good result, fingers crossed."

Sorrento are the only NPLWA side to reach the Round of 16 in this competition after a 1-0 win over Canberra United in 2017. Perkins is hopeful his side can emulate their northern neighbours.

"There's no reason why we shouldn’t be confident. A lot of players in the last few years have gone over east and have done so well, who have played in our leagues. I think WA has done pretty well in this competition over the past seven years since its inauguration," he said.

"We're not going there on Wednesday with any inferiority complex. We're going in wanting to win and that's our game plan, to go and do WA proud.

"We'll try to enjoy the build-up, soak in the atmosphere in the warm-up, go out to enjoy ourselves and perform and hopefully that's enough to get us over the line. I'm hoping it's an entertaining game for the fans, and we can get some WA fans down who aren’t necessarily ECU fans to cheer us on, too."