Gutsy Athena give Reds a fright 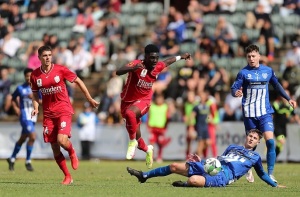 Mohhamed Toure of Adelaide United escapes the Floreat attention during today's FFA Cup Round of 32 match. Photo by Will Russell/Getty Images

Three-time winners Adelaide United survived a scare in Sunday's FFA Cup Round of 32 fixture before the holders defeated NPLWA – Men’s side Floreat Athena 3-1 after extra time at E&D Litis Stadium.

Athena full-back Chris Saldaris thrilled the crowd of around 800 when he cancelled out Louis D'Arrigo's first-half opener. But the A-League side ensure their progress to the Round of 16 thanks to substitutes George Blackwood and Yaya Dukuly.

The defeat brought Athena's season to a close, one in which they recorded their best league finish since 2012, won the State Cup and gave A-League opposition a run for their money in front of a buoyant home following.

Defender George Festa said he was proud of the team's performance and praised the local support.

"I'm immensely proud. We gave them a good fight and were able to panic them at some points, but they were professional and came through with the win, so we have to congratulate them," he said.

"To finish the season with this game as we did was class. No matter what was going on during the game, from the first minute to minute 120, the local supporters were behind us and we can't thank them enough.”

Sean McManus looked the most dangerous outlet for the hosts in the first half, but the best chances fell Adelaide's way early on with headed efforts from Mohamed Toure and Ben Halloran.

And the visitors, who were having their first competitive hit-out of the season, struck the first blow on 18 minutes Joshua Cavallo swung in a cross and for once Floreat switched off, allowing Louis D'Arrigo to arrive unmarked and he flashed a header into the bottom corner.

Adelaide could have been reduced to 10 men seven minutes later when Rob Harding was brought down by George Timotheou when through on goal, but yellow was the card awarded by referee Adam Fielding.

Bernardo then cut in from the left for United, but his shot was blocked by Marco Santalucia as United settled for a goal's advantage at the interval.

Nick Ambrogio nearly caught the Reds' defence napping early in the second half with the high press leading to a chance saved into the side netting, before Isaias' strike was scrambled away by keeper Thomas Chudy as the game opened up.

But the hosts did get their equaliser 11 minutes after the restart. Adelaide's defence could only clear as far as Saldaris and Floreat's top scorer drove into the bottom corner from 18 yards.

The holders could have regained the lead immediately when Toure headed another sweet Cavallo delivery off the underside of the bar.

Festa then blocked an effort from Blackwood in the final five minutes, while Nick Ambrogio almost charged an Adelaide clearance into the Reds goal as the game went to extra-time.

Having fought so hard to extend the tie, Athena coach Vujacic would have been frustrated at how this side allowed Adelaide to regain the lead within a minute of the restart. Halloran dribbled through on the right before being felled by Dennis Galan and Blackwood planted the penalty high into the net for 2-1.

Athena went again and Phil Arnold drove into the area and dragged wide via a slight touch off a defender, but the Reds wrapped it up as the extra-time interval loomed.

It was another substitute in Yaya Dukuly who hammered home through a sea of bodies, which proved decisive as Adelaide advanced and continued an unbeaten run in this competition which stretches back to 2017.

As for Athena, they could not have given more and McManus brought a brilliant save Delianov, who also did well to get across and keep out Laat Mathiang’s late free-kick.