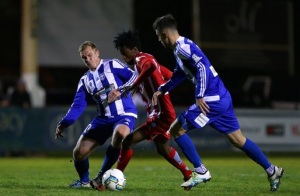 Chris Saldaris, right, in action for Floreat against Melbourne City in 2016. Photo by Getty Images

This will be Athena’s second meeting against elite opposition in the competition, after they lost 2-1 to Melbourne City in 2016.

In Floreat’s other foray in the FFA Cup two years ago, they were on the wrong end of a 4-3 thriller against Adelaide Olympic, a team who come to WA next Wednesday to take on ECU Joondalup.

Defender Chris Saldaris played in both of those ties, as well as representing Bayswater against Melbourne Victory in 2014. He says the excitement for these occasions never changes.

“This game still feels like the first one I played. The whole club are buzzing for it and hopefully a good local crowd comes out to back us in,” he said.

“It’s huge for the club. They’ve gone through a lot trying to get the approvals (to play the tie at our home ground) and the grandstand open. Especially in the club’s 70th anniversary year, it’s a big game which means a lot to the club, players, staff and supporters who support us every week.

“For the kids and juniors watching too, to hopefully see that pathway to the first team and that opportunity to play against an A-League side. It’s good and we hope everyone will come to show us support and help us try to get the win.”

Saldaris wore the captain’s armband in last weekend’s Top Four Cup final and could lead his team out again on Sunday afternoon. Despite injuries to Dean Evans and keeper Jason Saldaris, Chris’ brother, Floreat are still in good hands with a core group of experienced players who have won silverware in five of the previous six campaigns.

The defender himself has had an excellent season in both penalty areas, having scored 10 times, and hopes the experiences of playing at this stage previously can help the team this weekend.

“It’s probably one of the best seasons I’ve had and it’s still hard to believe really, but the boys have played a big part in that. Good delivery into the box helps with the goals,” he said.

“I guess I always just try to do my best whenever I’m in the penalty area if it’s getting a shot off, then defensively I just try to do my job and defend first, then try and lead by example, play with passion, back my teammates and help them as best I can.

“Obviously we’ll let the boys know what they’ve got to look forward to, but we’ll try not to let the hype of the game get to their heads, so we can play our natural game.”

Athena’s opponents provide a stern test though with Adelaide United the most successful side in the competition’s history having lifted the trophy in three of the six editions. They are also the back-to-back holders of 2018 and 2019, given no tournament was played last year due to COVID-19.

Floreat come off a disappointing 6-3 loss in last week’s Top Four Cup Final against champions Perth where they were the victim to a first-half blitz, which saw them trail 5-0 after 23 minutes. Vas Vujacic’s side had started 2021’s NPL WA season with a 12-game unbeaten run, but a combination of injuries and bad luck meant they were edged out in both league and finals by the Azzurri.

Second place was still Floreat’s best league finish since 2012 and the club won the State Cup for the third time in five years. Saldaris says Saturday provides a chance for the team to bounce back quickly from the Perth loss, as they aim to become the second WA team to advance to the Round of 32. Sorrento were the other in 2017.

“At half-time (last weekend), Vas told us not to worry about the score and anything that happened up to then, to go out and have pride in the way we want to play and show everyone we are one of the best teams in the league, to fight and come back into this game,” he said.

“We’ve got nothing to lose this week. Not a lot of teams get the chance to play against an A-League team, especially a team like Adelaide who won it last time, so it’ll be a good experience for the boys and hopefully we can go out and do the job.

“The boys will be up for it. Not many opportunities come around to play (in the Round of 32) and I’ve had the chance to play two games already. It hasn’t gone the right way before, but hopefully third time it can go the right way for us and we can go through.”