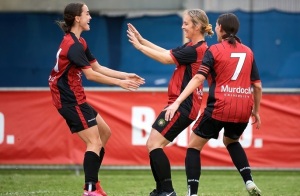 MUM FC defeated Perth SC 2-0 as they added the post-league silverware to the NPL title and State Cup.

Grace Betti, who netted the winning goal in their league title decider against Northern Redbacks, opened the scoring on 16 minutes as she slotted in following a strong run by Abbey Green.

Player of the match Marianna Tabain got the second, cashing in on some loose defending to shoot across keeper Rebecca Bennett.

Ealrlier in the day, Perth SC won the U23 final via a penalty shoot-out after they had drawn 1-1 with Fremantle City.