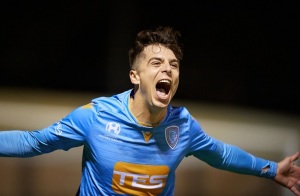 Alex Silla celebrates his goal which put Perth 3-0 ahead. Photo by Football West/FotoEnzo

Perth SC blitzed Floreat Athena with five goals in the opening 23 minutes before going on to win 6-3 in the final of the NPLWA - Men's Top Four Cup.

Kristian Santich started the ball rolling on six minutes with a stunning 25-yard flick-up and volley, and before Floreat could catch their breath it was 2-0 as Michael Domfeh sprinted clear to slip the ball past keeper Thomas Chudy.

Alex Silla fired low into the corner for the third and it was 4-0 on 15 minutes when Domfeh got his second. When Calvin Whitney made it 5-0, there were reals fears for Athena they could be hit with a double-figure humiliation.

Thankfully for coach Vas Vujacic and his team they managed to stop the bleeding and Chris Saldaris pulled one back from the penalty spot. It got better for Floreat early in the second half when Nicholas Ambrogio headed home, and they even threatened the most unlikely of comebacks as Ambrogio’s brave finish cut the deficit to two.

However, that was as good as it got for Floreat and Jordan De Leo’s header 11 minutes from the end ensured it was Perth’s night as they gave outgoing head coach Ramon Falzon a winning send-off.

Santich was awarded the Gary Marocchi Medal as player of the match.

Earlier in the day, Bayswater City won the NPLM U20 and U18 finals. In the 20s they overcame Perth Glory on penalties followinga  2-2 draw, while in the 18s they beat Inglewood United 2-0.