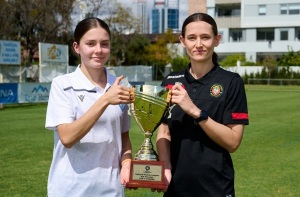 There will be a new winner of the Women’s NPLWA – Women’s Top Four Cup Final when Murdoch University Melville and Perth SC meet on Saturday at Dorrien Gardens.

The Azzurri advanced to the final after a 2-1 extra-time preliminary final win over Northern Redbacks, while the defending champions sealed their place in the decider with a 3-2 win against the same opposition in last week’s semi-final.

Tia Stonehill scored twice in that fixture, giving her 16 goals in both league and Top Four Cup competitions. She was also prolific in the State Cup, including two in the final against Balcatta, and expect her to have a big say if MUM FC are to complete the treble in Saturday’s NPLW showpiece.

“It’s been an amazing season. I’ve loved every week and feel so lucky to play with these amazing girls. There’s been so many players who have contributed over a whole season of games to get us where we are,” the striker said.

“It’s been awesome having that neck-and-neck race at the top. We knew one slip up would give Redbacks the league because both teams were getting results and neither could afford to make a mistake. It was nerve-wracking but good because teams have been hot on our trail wanting to beat us, which has kept pushing us to be better.

“Everyone’s had the right attitude, wanted to succeed and go above and beyond in terms of wanting to win the cup, win the league and now to go win this game and get that treble.

“We’ve noticed Perth have been coming home hard and have performed well at the end of the season, so going up against them in the final will be a challenge and a really tough battle.”

This has been Stonehill’s first season in the NPLW competition but her performances, particularly in big games such as her two-goal haul in July’s State Cup final, have made her one of league’s most dangerous attackers.

She says playing on the big stage is something she thrives on, but the balance of work ethic and love for playing the game has helped her hit another level.

“If you’re not having fun, there’s no point doing it is there?” she said.

“You’ve got to enjoy yourself, as hard as it can be. I find when I’m having fun, I’m more relaxed and confident because I’m a pretty happy and energetic person in life in general, so it’s hard to switch that off on the pitch.

“But it’s putting in the hard yards at training as well. Giving it everything when you’re tired, staying back and doing the extra running, but also having the confidence to back yourself. Every time I step on the pitch, I tell myself I want to make a difference for the team, going above and beyond for them to do my best.

“Everyone wants to play their best football and going into this season I’ve been working hard on my consistency. My job is to create and score, so when I’m doing that, I’m happy. It’s the best feeling in the world and I feel so lucky to be fit and healthy, and to be enjoying a successful year with the team.”

Saturday’s opponents Perth came through a hard-fought preliminary final in tough conditions against holders Redbacks, having lost star midfielder Gemma Craine to injury in the first half. Defender Tessa De Leo was proud with the spirit the team showed in the 120 minutes on Wednesday as they extended their winning streak to six games.

“It was a close game which came down to the final minutes, but it was a good performance. Our team has shown so much potential over the season, but haven’t quite taken chances or had that luck, so to get the win and play in a final is really cool and surreal,” she said.

“The atmosphere of the final will help push us through this week and getting that big result can only motivate us further to hopefully get over the line.

“I honestly think it’s a simple as things have just been starting to work for us. The things we’ve practiced at training were going well, but the minute details were going a little pear-shaped in the game and we weren’t converting opportunities.

“A few of those have gone in now. We’re communicating with more confidence, pressing well as a team and the unit is solid at the back. It’s been coming together and once you get that win, it’s pretty easy to keep it going when it’s working.”

De Leo is the sister of men’s captain Jordan, who will be part of the squad that faces Floreat Athena after the women’s final. The defender hopes both will be lifting winners’ medals at the end of the night and is excited for the day overall.

“With the U23s and also the men making it, it’s great for the club and if we needed any more motivation than we already do, then to go out and win a final in front of our crowd at home would be great,” she said.

“It would mean the world to the girls, the coaching staff and the board. It took a lot of hard work behind the scenes to get the women’s team up and going and to make that opportunity to happen for us. To come into the NPLW and win that first piece of silverware for the team would be amazing and all the girls are pretty aware of that.

“Against a team like MUM FC who are stacked with plenty of attacking options we’re going to have to be on it all over the park. We are going into it as underdogs from the outside, but inside we know we can bring it to them, match them and give it a real good go if we’re at it together.”

Also on Saturday, Fremantle City and Perth face off in the NPLW U23s final with the Azzurri having three teams in action across finals day.

Goals from Kate Ritchie and Stella Zampogna knocked out MUM FC in the midweek preliminary final, but they face a tough challenge against back-to-back champions Fremantle who defeated Perth 3-1 in last week’s qualifying final.