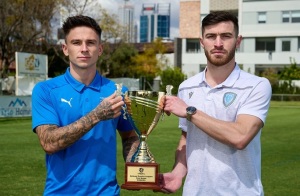 For the second year in a row, Perth SC and Floreat Athena meet at Dorrien Gardens for the season’s last piece of silverware with the Top Four Cup up for grabs on Saturday evening.

This set up a repeat of the 2020 final when Vas Vujacic’s side humbled the Azzurri 4-0.

But Perth turned the tables in last Saturday’s semi-final, beating Floreat by a similar scoreline. This came after they had pipped Athena to the league title by four points.

Saturday’s fixture will also be Ramon Falzon’s final match as Perth head coach after six successful years which saw him lead the club to four league titles and the Top Four Cup final in each year.

Azzurri full-back Alex Silla said it was a surprise to hear the news of Falzon’s departure, but said the team were determined to send him out on a high.

“It was a big shock. We’d gathered on Tuesday and the talk of the night was about wrapping up the league and the mood was great. But after training, we were told the news and went from the highest of highs in winning the league, to hearing your coach wouldn’t be with you next year,” he said.

“But we couldn’t dwell on it too much because the main focus for the players and the coaching staff was to wrap up the season with another trophy. We got back on the horse straight away and had a great win at the weekend, but there’s still a job to do on Saturday and it will be a bit emotional, I think.

“When Ramon came in (in 2016), I was in the U20s, and with the change in coach and a few players leaving I was lucky enough to be given a chance. He’s taught me to work hard, be humble even with success, and has instilled a winning attitude within the group to always improve.

“He’s a great coach who has been a big part of our success. The boys love him, and we absolutely want to send him off with a trophy this weekend.”

Silla knows what it is like to win trophies, having been a key figure in the club’s success through Falzon’s era. Two years ago, the defender chanced his luck with a late run into the box and scored a stoppage time winner against Inglewood in the 2019 Top Four Cup Final.

“As a defender, you don’t really score often, let alone in a final like that. So in the 90th minute to score the winner, it’s something I still think about now and seeing it come up in my memories still puts a smile on my face,” he said.

“You just get to the business end of the year, and it becomes real that you’re still in the hunt for trophies. A lot of us have been there before and know that winning feeling and I suppose it comes back into your mind again. It’s helped us to keep pushing on and as we kept closing the gap on Floreat, it became more realistic and helped us accelerate.

“I’m sure Floreat will be hungry to get a bit of revenge after that and the semi-final when we had a great game and showed no mercy. But they’re a great team and on their day have proven they can beat anyone. They rocked up on the final day and embarrassed us last year, so we’ll be doing everything to back up the weekend’s performance and hopefully avoid the defeat we had last year.”

Athena meanwhile, have had an indifferent end to the campaign, after letting a 10-point lead slip mid-year to miss out on league honours for the second straight season.

They have been more than capable of doing damage in finals though, as highlighted by last season’s decider and as recently as July when they defeated ECU Joondalup 1-0 in the State Cup Final, which was their third cup success in five editions. Full-back Marco Santalucia says Floreat will again be primed for the occasion.

“We love the big games and always seem to do well in them. It’s a one-off game and anything can happen. We played Perth at Dorrien Gardens last year and took home the chocolates, so hopefully we can do it again,” he said.

“It was a disappointing result on the weekend, but we bounced back like we always do. There was a few personnel changes and we set up more defensively, which I think was key to getting past Glory. They usually beat teams by passing through the lines but we prevented that from happening and ultimately limited their chances on goal.

“We have a much younger team than we did at the start of the year with 34 players featuring in the first team this season. So, the senior boys have to draw on that experience and help the young lads as much as possible if we’re to get over Perth.

“Being 10 points clear halfway through the year and finishing second wasn’t ideal, but credit to Perth. The season is a marathon, not a sprint and the table never lies, but we still believe on our day we are the best team in this league. It’s the league we wanted this year but two pieces of silverware would still make for a successful campaign and it should be a good battle on Saturday night.”

Earlier in the day, Bayswater and Inglewood also meet for the second time in seven days when they play in the NPLM U18s final in a first-versus-second clash.

In the NPL U20s, Perth Glory are looking to complete a league and cup double when they face State Cup winners Bayswater.

Glory won the league but have taken the long way after Bayswater defeated them in the major semi-final. A 4-2 midweek win over Floreat put them into the decider, largely thanks to Joe Hobson’s hat-trick.

The preview for the two NPLWA – Women’s Top Four Cup finals can be found here.

- The Top Four Cup finals weekend begins tonight with the Men’s State League U18s final between Morley Windmills and Kingsley (6pm). League champions Morley edged Wanneroo City 1-0 in their semi-final, while a devastating first-half display set Kingsley on their way to a 7-1 demolition of Joondalup City.

This will be followed by the Division Two Reserves final involving Joondalup City and Wanneroo. City beat Dianella 2-1 in the semis, while a hat-trick from Connor Lynch gave Wanneroo a 3-2 victory over Kingsley after they had trailed 2-0.

Then on Sunday attention turns to the Division One finals.

The two first-team semi-finals threw up a couple of surprises. Champions Stirling Macedonia were beaten 2-1 by Joondalup United, and Western Knights were another side who let slip a 2-0 lead, with Quinns the beneficiaries.

Stirling at least made the Reserves final, beating UWA Nedlands 3-0. They will play Subiaco, another team to win 3-2 after being two goals down. Ethan Johnson scored the stoppage-time penalty which clinched the win over Fremantle City.

The Under 18s final is between Subiaco and Fremantle City. Subi beat Olympic Kingsway 3-2 on penalties after a 1-1 draw. Fremantle, meanwhile, won 2-1 at Forrestfield United.