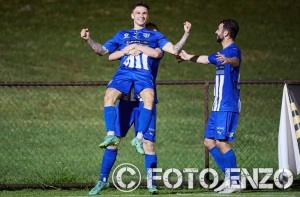 Football West News
Floreat Athena's Robert Harding celebrates his decisive goal against Perth Glory last night. Photo by FotoEnzo
Floreat Athena will face Perth SC in this Saturday's NPLWA - Men's Top Four Cup final at Dorrien Gardens after Athena defeated Perth Glory 2-1 in last night's preliminary final.
Athena led at the break at E&D Litis Stadium after Sean McManus' shot was inadvertently turned into his own net net by Glory defender Aidan Coyne. McManus then set up Robert Harding for the second. And while Chris Donnell pulled one back near the end, Glory were unable to find an equaliser.
Saturday's final will be a repeat of last year's Finals Series decider, which Floreat won 4-0. Current form leans in the Azzurri's favour, however, after they defeated Athena by a similar scoreline in the semi-final just four days ago.