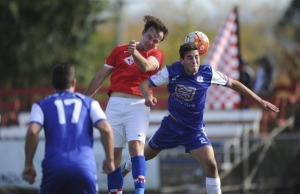 Matchday 3 will see five more games take place across Canberra as teams begin to find their feet following the opening rounds of the PlayStation® 4 National Premier Leagues competition and, leading the way, will be the traditional battle of old foes as Belconnen United meet Canberra FC at McKellar Park.

For many years the clash between the pair has been a decent barometer of how the final table may look at the end of the campaign and, early indications at least, suggest that both of these huge clubs will be in the mix come September despite their contrasting results to begin the year.

The Blue Devils have claimed two from two so far having pretty much dominated the entirety of both of their league matches to date having trounced the CU academy 8-1 in their season opener before winning in more prosaic style last time out, seeing off Monaro Panthers 2-0 at the Riverside Stadium. A large number of youngsters have been making their mark at Belconnen with Ahmed Ugool, Toby Richter, Sam Smith and Nick Rolls impressing the management.

FC meanwhile have had, arguably, the harder start as a narrow 3-2 win at home against the Panthers was followed by a 1-2 home defeat to Canberra Olympic in Round 2. The match at Deakin Stadium last Sunday saw a lacklustre FC performance, insipid in the final third and lacking their usual craft and spontaneity that has characterised their success in recent years. They will be hoping to rediscover that zip at McKellar.

The Round commences on Saturday afternoon at the Australian Institute of Sport as the FFA COE clash with Gungahlin United. The Centre of Excellence would have been disappointed to lose on Saturday evening last week, falling to a surprise 4-3 loss to Woden-Weston FC after leading 3-1. Centre forward John Roberts outlined his potential though with a sparkling hat-trick and we can expect to see many more goals from him this season.

Gungahlin United would have been delighted by the resilience shown in gaining a 2-2 draw with Tigers FC at Gungahlin Enclosed with a late goal from Liam Walsh earning them a well-deserved point from an entertaining match. They will need to guard for the pace and movement of the FFA COE if they are to get anything from this clash.

On Sunday Woden-Weston FC travel to AIS to tackle the CU Academy in what promises to be a high scoring match. Woden-Weston were in great form and showed brilliant character, grit and determination to come back from behind against the FFA COE led, in no small part, by their Spanish star Richy Hurtado Lora. Captain Ben Greig led by example at the back, even venturing forward to score a crucial goal and give his team a lead. The Academy meanwhile let slip a two-goal cushion against Tuggeranong United to fall to defeat and need to tighten up defensively.

Tuggeranong, buoyed no doubt by their first win since 1st August 2014, head across the NSW border to the Riverside Stadium where a warm welcome from the Monaro Panthers awaits them. The Panthers have played a rigid 4-1-4-1 in their two matches to start the season, against Canberra FC and Belconnen United, but may be tempted out of their defensive shell by the visit of a Tuggeranong team who they will feel they have the measure of. There are usually plenty of fireworks when this pair meet and we are looking forward to more on Sunday afternoon.

Matchday 3 is completed by the Tigers FC visit to Canberra Olympic. Olympic come into the game off the back of a two-game winning start to the season having beaten Gungahlin United 3-0 and Canberra FC 2-1. The manner of their win at Deakin Stadium suggests that their pre-season favouritism is well justified. After winning against one of their major rivals they will be keen to lay down a marker by seeing off another creditable title challenger.

Tigers FC themselves looked set for a 100% record after leading 2-1 against Gungahlin United but conceding late on left them with a frustrating point. In Stephen Domenici and Nicolas Abot they have a duo with six goals between them already. There is no doubt that there will be goals in this one!