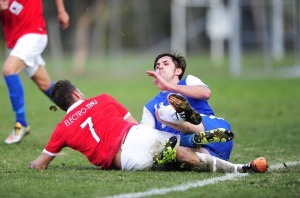 Canberra FC meet Canberra Olympic in the PlayStation 4® National Premier Leagues: Capital Football Grand Final at McKellar Park on Sunday as the winter season in Canberra draws to a conclusion. This will be the third time in five seasons that this match-up will decide the fate of the Grand Final trophy and with the previous two encounters being memorable occasions, the scene is set for 2015 to be the ultimate showdown.

Indeed, this is the fourth time in the history of ACT football that teams representing Canberra FC and Olympic have made the big dance with the current standing at two wins a piece so something will have to give on the weekend. The pair first met back in the 1997 showdown when Olympic won 4-0 before Canberra Deakin gained revenge in 2003. The epic 2011 clash, which FC won remarkably 8-5, is still fondly recalled as is the brace from Robbie Schroder which decided the 2013 version.

Ironically, considering that FC were league champions and Olympic finished fifth (making the finals because of the FFA COE ineligibility), the League Champions have only gained one point from their pair of clashes with Olympic, suggesting that Frank Cachia and his team enjoy the challenge put down by their rivals. In fact FC has only won once in the last five encounters between the clubs since the thirteen-goal Final thriller, that in the 2014 Minor Semi-Final.

At Deakin Stadium in late May goals from Callum Smith and Philippe Bernabo-Madrid were enough to cancel out a strike from former Olympic midfielder Robbie Deeley as FC was beaten 2-1 at home. At O’Connor Enclosed in August, the tables appeared to be reversed as FC led 2-1 heading into stoppage time after goals from Muad Zwed and Josip Jadric. Zwed’s goal in the last minute looked to have won it for FC only for substitute Oliver Wiederkehr to head an equaliser straight form the kick-off.

If there is one thing that both teams possess it’s an abundance of pace. FC have a quartet of flyers in Josip Jadric, Daniel Bennett, Thomas Milicevic and Niko Kresic from which to perm any two of four for the wide positions in what is usually a five-man midfield. That leaves the midfield trio of James Field, Ian Graham and possibly Robbie Deeley to do battle with Olympic’s engine room which contains the likes of Daniel Colbertaldo and Tom McLachlan.

Olympic’s pace is provided by Smith out wide and the direct running of Jordan Tsekenis up front. Following the loss of leading scorer Bernabo-Madrid in the Round 7 match at Deakin with a knee injury, the acquisition of Tsekenis from Belconnen turned into an astute piece of business by Cachia. Six goals in ten appearances speaks of a player who has settled well. Oliver Wiederkehr is a jet-heeled replacement and another whose late addition to the squad gave Olympic the impetus to push on.

Defensively both teams have sharpened up in recent weeks and call upon a veteran, Aidan Brunskill in FC’s case and Phil Yarnold for Olympic, to marshal their younger cohorts. Yarnold will be celebrating his 200th Premier League appearance in the Grand Final – an amazing achievement for a player who has been a solid contributor for a number of years.

So, where will this game be won and lost? Olympic will feel they have the necessary guile and speed, especially in the outstanding Robbie Cattanach, to  open up the FC back-four, much as they did to the Tigers in the Preliminary Final. FC meanwhile welcomes back top-scorer Thomas James and his game-changing ability, eye for a goal and general nuisance value may swing it in favour of his team. Either way, we expect drama, skills and goals!