WSBL Player of the Week - Rnd 8 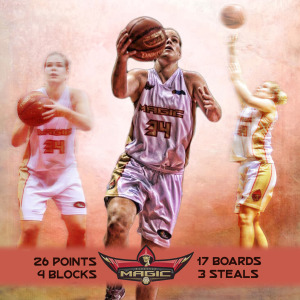 THE Week Eight Women’s SBL Player of the Week has been awarded to Carly Boag of the Mandurah Magic.

The undefeated Mandurah Magic stretched their winning streak to seven games on the weekend downing the East Perth Eagles 70-52, with Carly Boag contributing in a big way with a game high 26 points, 17 rebounds, 2 assists, 3 steals and 4 blocks.

Since joining the Magic, fresh off the back of a Championship win with the Sydney Uni Flames in the WNBL, Boag has been phenomenal averaging a double-double with 22.5 points, 11.5 rebounds, 2.5 assists, 2.6 steals & 1.3 blocks game.

Boag brings size, skill and experience alongside quality import Nicy Gilday and league great Casey Mihovilovich, as the Mandurah Magic are poised to make a push for the clubs first ever SBL Championship this season.

The Magic now face a huge task this weekend as they meet the only other undefeated WSBL side, the Perry Lakes Hawks to open Women’s Round on Friday night at Bendat Basketball Stadium, where Boag will be up against fellow WNBL star Natalie Burton in what should be a scintillating match up.

The weekend doesn’t get any easier for the Magic as they host the Rockingham Flames back in their brand-new stadium at Mandurah Aquatic and Recreation Centre for their official opening, tip-off Saturday 8:00pm.