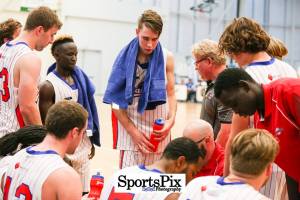 It was a return to the winners circle for the South West Slammers Men as they defeated the Perry Lakes Hawks with an impressive 82-69 victory on Saturday night.

A healthy crowd was entertained by a fast start by both teams as the two sides attacked the ring early resulting in multiple lay-ups to start the game.

The Hawks tried to isolate big man Brian Carlwell and stalwart Ben Purser early via perimeter dribble hand offs but the Slammers defense were able to withstand the early post onslaught from the visiting team.

For the home team versatile big man Chris Douglas was lively early at both ends playing with energy and vigour.

The start of the second quarter was all Slammers as they bolted out to a 10-2 run in the first five minutes. The Hawks pegged back the lead courtesy of some perimeter jump shots but the Slammers again finished the quarter strong to head into the half time break  with 38-31 advantage. Perry Lakes' Matthew Adekponya led all scorers with 12 points while fellow dreadlocked assasin Tre Nichols chipped in with 11 for the home team.

The second half maintained the same quick tempo as both teams continued to exchange transition baskets. But it was the fourth quarter that provided all the nervous energy for both camps as the Slammers played keep away from a Hawks team attempting to swing the game back in their favour.

Another Slammers surge early in the fourth saw the home team keep a nine point advantage that extended to eleven after some crafty post work by Brian Voelkel. When Michael Lay hit a three pointer in transition with 7 minutes left the Slammers lead increased to 14 points. Things got worse for Perry Lakes as Adekponya was assisted off the floor with a leg injury and failed to return for the rest of the contest. Coach Matt Parsons utilised a timeout to address his troops but the ensuing minutes added to the visitors woes as Voelkel and Lay continued to build scoreboard pressure, both connecting on lay-ups, the latter a three point play.

However with just over four minutes left in the ball game, the Hawks responded with back to back baskets by Ben Purser and when Robert Waters dropped a three pointer to bridge the gap back to twelve points, the Hawks were back within touching distance.

The last two minutes were punctuated by three point plays for both teams and with each team in the foul bonus, scores from the free throw line were at a premium.

Michael Lay was superb in the fourth quarter, proving hard to contain both inside and outside. A big Tre Nichols three point basket over an outstretched Waters hand was the final statement on an emphatic 82-69 Slammers victory over Coach Charles Nix's former team.

The home team was led by Brian Voelkel's triple double of 12 points, 14 rebounds and 13 assists, Tre Nichols with 23 points and a stellar fourth quarter by Michael Lay who finished the game with 13 points. It was an impressive defensive effort by Nix's men as they made it difficult for the Hawks to get any continuity and rhythm on offense.

The Hawks were led by Matthew Adekponya who had 16 points and 10 rebounds before leaving the game with an injured ankle. Big man Brian Carlwell also added 16 points for the visitors.