WSBL Player of the Week - Rnd 7 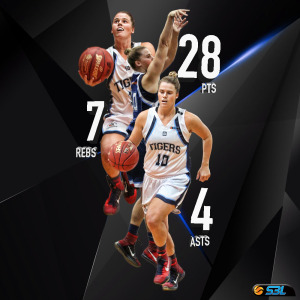 THE Week Seven Women’s SBL Player of the Week has been awarded to Stacey Barr of The Local Shack Willetton Tigers.

Another week, another super impressive performance by Willetton’s Stacey Barr who just keeps putting up big numbers week in week out.

On Sunday afternoon, the Tigers hosted the South West Slammers with Stacey Barr again hitting the scoreboard to record a game high 29 points, 5 rebounds and 3 assists guiding her team to a comfortable 97-68 win.

The Willetton Tigers who have now acquired the services of import Jessica Hootmann will be looking to continue their solid form and solidify their position in the top four.