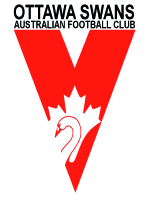 The two-time Pre-Season Cup winning Ottawa Swans Australian Football Club is the closest Australian Football club in the region and for a number of years has served as a stepping stone for players wanting to play at a higher level of football. On a regular basis during the AFL Ontario (OAFL) season players from Montreal region travel to play with the Ottawa Swans.

In 2011 the great relationship with the Swans was at it's strongest. A total of 9 Ottawa Swans players played in the ECAFL metro league. In addition to this excellent support from the Swans, the Quebec Saints showed their support with 6 Quebec Saints players travelling to Ottawa and Toronto to assist the Swans in their strongest year in the OAFL to date.