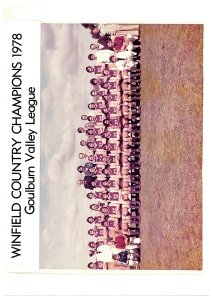 “The Road to Glory for GVL”

1978 – The big year: 1978 was the year that the Goulburn Valley Football League became the number one League as champions of Country Victoria. The GVL had arrived as a force to be reckoned with. It was a year that changed the profile of Goulburn Valley football after it had been regarded as second rate.

However the road to glory didn’t begin in 1978, it commenced many years earlier.

The new President: It was in 1965, after the death of long serving League President Tom Hastie of Tatura that the League needed a new President. Former Kyabram player Jack Arthur was elected to the position. Jack managed the large orchard complex known as “Murrumba Kyabram” and was an experienced business man.

Jack Arthur was a lover of football and was keen to see the League succeed. Jack took on the GVL around the time that the Nagambie, Rushworth and Murchison clubs had withdrawn from the League as they felt that they could not survive against the power teams in Shepparton, Kyabram and Tatura

Country Championship form: One of the issues Jack was faced with was the fact that the GVL historically not performed well in Country Championship matches, particularly against the neighbouring Ovens and Murray and Bendigo Leagues. He committed himself to try and increase the number of competing teams and add much needed strength to the League.

Those clubs all had some multi talantedl players resulting in an immediate lift in the standard of matches they took part in.

The League was running beautifully under Jacks’ guidance. With Keith Wellman as an efficient and dedicated League Secretary, the GVL was in a great position to capitalize on an important announcement soon to be made regarding country football.

A new inter – League competition: In October 1977 the Victorian Country Football League announced that the marketers of Winfield cigarettes would sponsor a Country Championship series from 1978 which would see the country Leagues play in a competition- to be called the “Winfield Championships” in which the winners of games would continue to play against other winners to eventually find the overall winner to become the Champion League of Country Victoria.

Jack Arthur immediately saw the possibilities for his League to show its new strength and within 24 hours of the announcement had commenced work on planning for the next year.

The planning: By the November League meeting, Jack presented his plan and received great support from the clubs.

He chose as coach of the League team the much respected Bob Allison, coach of the reigning premiers Echuca who had previously coached both Stanhope and Tongala

Training squad: The match committee became a dedicated team and within a month they had met and planned the tilt at the title. They soon named a proposed training squad and were in touch with the players to advise them of the seriousness of the League’s intentions to win.

Nothing would be easy, as to win the title you had to be successful in three games and play a fourth game in the final - all in the one year. The players would also be required to compete and train with their own clubs. Interestingly, other Leagues didn’t commence their preparation for the series until March.

The year begins: 1978 kicked off with great enthusiasm as the League squad swung into action. Training runs were held on Sundays and on Wednesday nights. Seymour hosted several training sessions to help the players who were working in Melbourne.

It soon became obvious that the players had welcomed the opportunity to be in the squad and desperately wanted to take part.

First game a struggle: When the Winfield draw was announced the GVL was drawn to play against the neighbouring Tungamah League at Deakin Reserve on 14th May. The GVL entered the game as firm favourites, however by half time in the game the GVL had its back to the wall. At the long break, Bob Allison berated the boys in purple and gold for their lack of effort. Thankfully things changed in the 3rd quarter. The GV had plenty of the ball but kicked badly, scoring 6 goals10behinds for the term

The final term was a struggle and luckily the GVL won its way into the second round with a 14 point win scoring 16-26 to 16 -12. Seymour ruckman Bernie McCarthy was best for the GV.

Round 2 – Beating the O&M : There was little time for reflection, as three weeks later on 5th June the GV travelled to the Benalla Showgrounds to play against their arch rival, the Ovens and Murray League who they had never beaten. The large crowd was treated to a magic day’s football. The GV boys showed desperation and a great will to win.

led the way and greatly helped the GVL create history with a stirring victory, kicking 17 -12 to 15-8. It was such an exciting occasion for all GVL fans.

League President Jack Arthur in an emotional speech to the players after the match said “the GVL history dates back to 1894 but of today I’m sure we can say this is our finest hour”. Little did Jack realise at the time that the best was yet to come.

The GVL had reached the semi-final of the competition and met the strong Latrobe Valley League at Deakin Reserve on Sunday 2nd August.

Semi Final - Mud and slush: On the night before and the morning of the match a deluge of 3 inches of rain fell in Shepparton and Deakin Reserve was covered in water. As the match progressed it became a quagmire. In atrocious conditions the GV players were kept in the game by Mooroopna centre man Ian Linford who played the game of his life and drove the ball forward time and again whilst completely covered in mud in a best on ground performance. The GV hung on to win kicking 12– 5 to11- 3 to take the purple and gold colours into the State final.

The Winfield Final: On Sunday 6th August Large crowds of Goulburn Valley people travelled to Colac to see the GV meet the Hampden League in the Winfield Grand Final.

President out of action: The team arrived on the Saturday for a training session and were disappointed to hear that the League President Jack Arthur had been rushed to Hospital with a heart attack. He would not be at the game.

The day was cool but fine as the nervous players ran out in front of a massive crowd for the biggest game of their lives. Bob Allison had given an inspiring address imploring the boys to give their all for Jack Arthur.

GV sets the pace: The players accepted the challenge and all lifted their efforts.

Rover Gary Cooper was scintillating with a best on the ground performance, Graeme Kendall played an inspiring captains game, Echuca’s Kevin Quinn won in the ruck all day, Seymour’s Neville Green gave a brilliant display on the wing and Ray Stomann kicked 6 goals to boot the Goulburn Valley home. Tatura’s Brian “Tiny” Finnigan showed just how much he was prepared to give as he played over half the game with cracked ribs.

Glorious win: When the final siren rang the Goulburn Valley League were Champions of Country Victoria, kicking 16-13 to 12 -15 winning by 22 points in a high standard bone crushing grand final.

The feeling of togetherness and team spirit was a major factor in the success of the campaign. As the editorial in the next Saturday’s program (The Supporter) stated “Every member of the squad brought honour to the GVL and they can all be proud of their involvement”. That was indeed the GVL’s finest hour.

Chairman of selectors Bill Enders travelled to Melbourne to present the Winfield Cup to an ailing Jack Arthur who raised a smile as he said” They were all magnificent”. Jack passed away a week later in the knowledge that he had played a major role in the road to glory for his beloved Goulburn Valley Football League.

GVL elevated to higher standing: The Winfield win elevated the GVL to greater heights. Players from across Victoria were keen to join the GV ranks due to the standard of football. Above all it set the GV on the path of continued success and being accepted as a top League.

Following that success, the GV players continued to support the championships in ensuing years. Six years later Roland Crosbie coached the GV to a 24 point win over the Geelong League to win its second State title.

Then in 1994 Graeme Weatherly coached another State title win with a 32 point victory for the GVL over the Mid Murray League.

The road to country championship glory was paved by the wonderful work of Jack Arthur who developed a squad of players and administrators who loved the League and gave there all to ensure the League became successful.

GV team as selected on the Thursday prior to the game.

On the Saturday before the game Terry Keenan, Laurie Shiels and Neil Haw failed fitness tests, causing John Haw to play on the forward flank, with Daryl Reid and Gary Fletcher on the interchange bench.

The team which played in the Grand Final of the Winfield Championship was: