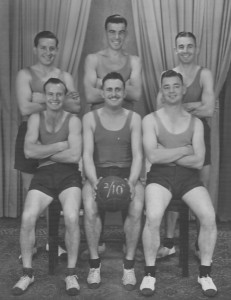 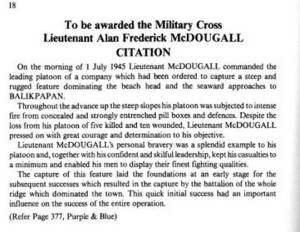 Honour off and on court

ANZAC Day coinciding with Easter has special significance in basketball stadiums across the city this weekend, with each bounce echoing a heritage of gunfire, sweat and sacrifice.

The connection begins in the Adelaide Showground in late 1939 as brave men gathered to form the 2/10th Battalion in the frightening shadow of Nazi and Imperial Japanese aggression. The men trained at Woodside, and later NSW before heading off to Egypt and the long terrible years of World War II.

After fighting with distinction in places like Tobruk, Papua New Guinea and Borneo the returned servicemen of the 2/10th Battalion formed two basketball teams under the 2/10th name in Adelaide in 1946, they won the B Grade premiership that year with players including Military Cross winner Alan McDougall.

The men of ``the Adelaide Rifles'' had picked up basketball during their Army service, particularly while waiting to be repatriated home from Borneo at the end of the war. Keen to continue playing the sport with their mates, they laid the foundations for what was to become one of SA's biggest basketball clubs. By 1951 the club had changed its name from the 2/10th to Norwood, in line with moves at the time to align clubs to geographical districts.

After various up and downs the cash-strapped club began hosting the Easter Classic Carnival 30 years ago _ it now draws dozens of teams from some 30 clubs around Australia and from Anzac partners New Zealand playing in multiple stadiums, giving Adelaide a significant tourism boost as hundreds of players and supporters flock to town. This year's Classic will see the finals played tomorrow on Anzac Day, in a potent reminder of the Norwood club's military heritage.

The finals will not start before noon as a mark of respect, and an Anzac Day Commemoration will be held prior to the start of games with commemorative pins on sale in support of the of the RSL. Basketball's links to the 2/10th do not end there. The Woollacott Medal is the highest individual award in SA men's basketball and is named in honour of T. H. H. ``Noel'' Woollacott, who enlisted in the 2/10th.

Burra-born Woollacott was a champion sportsman in football, tennis and cricket and was elected inaugural president of the SA Men's Basketball Association in 1938 after tireless organisational work which saw the sport soar in popularity. He was killed in action at Sanananda in PNG in 1943, aged 35, leaving behind a wife and two young children. The medal - back then called the Woollacott Trophy - was first awarded in 1947 in his honour. Mr Woollacott was one of the 315 men killed and 525 wounded from the 2/10th during World War II.

Part of the wider legacy of the 2/10th sacrifice is today's Norwood club and its Easter Classic Carnival, where a new generation of players such as Norwood's under-12 division one team enjoy competing in a free land thanks to the service people we honour on Anzac Day.

Many of the men of the 2/10th discovered basketball during their time in the army, with the Battalion diary showing that it was one of the recreational pursuits the men had in Borneo in the time from after the war ended in 1945 until they were finally sent home.

The team shown in the photograph below was effectively the first Norwood team. They were one of two teams of 2/10th returned servicemen who entered teams of that name into the re-formed SA Men’s Basketball Association in 1946. They changed name to United in 1947, and set about being promoted and building a club.

As “United” they competed in the A Grade competition in 1948, and by 1950 had 3 teams in various grades. At the end of 1950, the Association mandated that teams take on the name of the league football clubs in their area. “United” was renamed “Norwood”, and the majority of the players shown below were still playing A Grade basketball when “Norwood” competed for the first time in 1951. In 1954, the club was the first “Association” side promoted to the recently formed “League” competition, and in that same year it fielded its first women’s team.

Of note is that the player in the middle of the front row, Alan McDougall had won a Military Cross for bravery under fire 12 months prior to this photograph being taken.

The Woollacott Medal is the highest individual award in SA Men’s Basketball, and is named in honour of T. H. H. “Noel” Woollacott, who enlisted in the 2/10th in World War II. First awarded in 1947, and originally given to the Best and Fairest player in the District competition, the Noel Woollacott Trophy eventually evolved into the Woollacott Medal and was upgraded to Fairest and Most Brilliant in the early 1970s. In 1999 for the first time the medal was awarded to the ABA Central Conference's Most Valuable Player.

Originally from Burra, Woollacott was an accomplished sportsman, and operated what today would be called a sports store in Gawler Place in the Adelaide CBD. He was heavily involved in local tennis as both a player and coach, with the SA Lawn Tennis Association in 1944 recognising the work he did to inaugurate their annual junior and age championships, by naming them in his honour

In 1937 The Mail in Adelaide reported that “Indoor basketball has made an advance in Adelaide during the last 10 weeks unprecedented in the history of any game”. Every week 1,000 players and 60 men’s teams were playing the “International rules five a side” style of basketball at Duncan’s Building in Franklin St the city, and the chief organiser for the newly formed SA Men’s Basketball Association was Noel Woollacott. At its AGM in March 1938, Woollacott was elected the inaugural president of the SA Men’s Basketball Association.

SX18743 THH Woollacott died in action in New Guinea on January 20th 1943, at the age of 35, leaving a wife and two young children. He had only joined the 2/10th battalion a few days before being killed at Sanananda in PNG. As the 2/10th newsletter states (2005) “Many Australian lives were lost in the beachhead battles of Buna, Gona and Sanananda. History shows that the enemy were well established in defence but weren't being adequately resupplied or evacuated and the futile frontal assaults by Australian soldiers were unnecessary in the big scheme of things. But the generals wanted it taken.”

The rumors are true: We will get you the highest possible refund!

Serving the Defence community since 1953