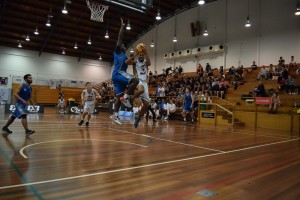 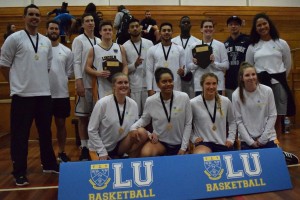 Canterbury Basketball hosted the second ever UTSNZ 3x3 Tournament this past weekend, with almost 50 players competing in 16 teams, as all eight New Zealand universities were represented. It wasn’t only university pride on the line, as the winning teams in each gender qualified for the World University League, and receive the airfares to cover travel to Xiamen, China in September this year.

The number of teams entered this year was more than double the amount that attended in the 2016 iteration. UTSNZ Executive Director, Sarah Anderson noted that the “standard of play was higher across the board, with increased commitment, training and intensity from the players”. A high level of fitness was a prerequisite to compete in this competition, with every team playing ten high paced games during the six and half hour tournament.

Seven universities competed in the Women’s championship, with the University of Canterbury Falcons (UC) entering two teams. Lincoln University (LU) looked to be the team to beat here, going a perfect 7-0 in round robin play, with no other team closer than four points in their head to head match. University of Auckland (UoA) which featured 2016 New Zealand 3x3 Player Georgia Agnew, was also solid at 6-1, before things got a little bit tougher. Otago University (OU) was sitting at 4-3, while AUT, UC and Victoria University (VU) all were deadlocked at 3-4. LU continued their form, winning 19-5 over UC’s second team, while AUT just prevailed 12-11 over the UC Falcons, and Victoria edged OU 6-5. Waikato (seeded 7) had a big upset, knocking out the favoured Auckland (seeded 2) team, in a low scoring game, 6-3.

LU kept things rolling in the semifinals, winning 11-6 over AUT, while Victoria and Waikato headed into overtime with scores locked at 7. Victoria drew first blood here, but only a layup, and had to sweat it out as Waikato had two excellent looks from behind the arc, before they could get another score, and gain a spot in the final 9-7. After the drama that took place in their semifinal win, Victoria was somewhat spent, unable to keep LU’s Connie Poletti and Caitlin Grice from gaining extra possessions in the final, as they rebounded missed shots. Lincoln was able to hang on in a 12-6 game, and the ecstatic ladies knew they were heading to China later this year. Final standings and results from the UTSNZ Women’s 3x3 Championship can be accessed here.

All eight NZ Universities fielded entries in the men's competition, and the small margin between victory and defeat was especially evident here, with every team winning at least two games in pool play, and no team going undefeated. Like their women, the LU men grabbed the number one seed heading into the quarter finals, but it took a huge basket in overtime from Ben Williams to escape from the OU Men here, 13-11. AUT held on 9-8 over Victoria while the Auckland was similarly tested by UC 19-18. Waikato having the only “easy” game of the Quarterfinal round as they bested Massey University (MU) 21-11.

In the semifinals, LU had a quick early lead of AUT, but let them right back into the game, before sneaking away with a 14-13 win, and a spot in the final. Auckland was more familiar with Waikato, and held on here in a 14-10 win, to set up a rematch of sorts between the two finalists in last year’s 5x5 UTSNZ Championship (James Cawthorn, Ben Williams and Ben Bowie from LU, and Zachary Easthope from Auckland, all being members of both of their respective teams). Every time it looked like Lincoln was about to build an insurmountable lead, some timely shots from behind the arc, courtesy of Samuel Aruwa, kept the UoA men close. The game eventually became tied at 16-16, before a Ben Williams floater broke the deadlock, and a huge two point make from ben Bowie with :25 remaining gave LU enough of a cushion to win 20-16, and join their female counterparts in booking flights to China! Final standings and results from the UTSNZ Men’s 3x3 Championship can be accessed here.

The National Tertiary 3x3 Championship event is part of a suite of competitive national inter-tertiary championship events led by University and Tertiary Sport NZ (UTSNZ), in partnership with national and regional sporting organisations. UTSNZ was established by New Zealand university Vice Chancellors in November 2015, replacing the former University Sport New Zealand (USNZ) organisation. It is the only national sports body specifically targeted towards the New Zealand tertiary sector and aims to foster and develop sporting opportunities for all university and tertiary students. The initial focus of the new entity is to revive competitive inter-tertiary sporting competitions, lift the standard of these competitions and continue to provide pathways to international participation opportunities. For more information visit www.utsnz.co.nz