From the Seventies Onwards 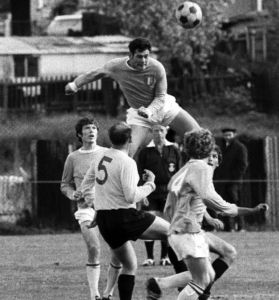 A potted history of the major happenings in the game in WA from the 1970s onwards.

1970 - One of the world game's great goalkeepers, Russian legend Lev Yashin, is a member of the touring Moscow Dynamo side that beats WA 5-0 at the Claremont Showgrounds.
1971 - Azzurri striker John Van Oosten scores all four goals in the 4-1 win over Swan Athletic, clinching the title with four fixtures still remaining. An amazing pic of Van Oosten leaping high - Aussie Rules style - over his opponents appears on the back page of The West Australian. (see picture left)
1975 - Kwinana United defender David Jones becomes the first Australian-born player to win the Gold Medal as WA's Fairest and Best. Former Coventry City midfielder Ernie Hannigan finishes second.
1975 - The State team claims one of its most famous victories, beating Scottish giants Rangers 2-1 at Perry Lakes Stadium. The goal heroes are George McMillan and Ray Ilott.
1975 - WA wins the Marah Halim Cup in Indonesia, beating South Korea 2-0 in the final with goals from Ernie Hannigan and Nick MacCallum. Alan Vest is the coach.
1976 - WA makes it back-to-back triumphs in the Marah Halim Cup. They again beat South Korea in the final, the 2-0 victory being achieved with goals from George McMillan and Nick MacCallum.
1977 - The State women's team takes part in a ground-breaking tour of Malaysia and Singapore, becoming the first Australian female representative side to venture into Asia.
1978 - WA teenager Anna Senjuschenko is named in a World X1 after some brilliant performances for Australia in the Taiwan Women's Football World Cup. The WA women's team wins the national championship for the first time.
1979 - Sandra Brentnall, aged 17, becomes the first goalscorer in Australia's first A international game when she bags the opener in the 2-2 draw with New Zealand in the Trans Tasman Cup.
1980 - WA's remarkable Sandra Brentnall becomes the first Australian woman to score a hat-trick at international level in the 3-2 win over New Zealand in the Trans Tasman Cup.
1980 - At the age of 41, Manchester United legend Bobby Charlton makes three guest appearances for Azzurri, scoring twice. His Old Trafford team mate, George Best, plays one game for Osborne Park Galeb in 1983.
1981 - Azzurri are unbeaten to win the league title - 16 wins and 2 draws - and get a $10,000 bonus from Red Rooster for not losing a game. In a memorable year, the club also won the Night Series and D'Orsogna Cup under coach Gordon Ferguson.
1990 - Floreat Athena's John Hunter gets five hat-tricks on his way to scoring 31 goals from 17 games to be the State's top marksman.
1990 - Perth Italia's Peter Murphy scores nine times in the 10-1 win over Kwinana to equal the post-war record set by John McInroy in 1959.
1992 - WA surge to a shock 3-2 win over German side Werder Bremen, who had won the European Cup Winners Cup two weeks previously. The WA goalscorers are Stan Lazaridis, Tony Carbone and Carl McDarby.
1993 - Perth referee  Marilyn Learmont becomes the first woman to officiate in a National Soccer League match when she runs the line in the West Adelaide-Brisbane clash.
1994 - The newly-formed Perth Kangaroos are unbeaten throughout the season to win the inaugural Singapore League. Paul Strudwick is the league's joint top scorer with 16 goals.
1995 - Goals from Stan Lazaridis and Bobby Despotovski give the State team a 2-1 triumph over Nottingham Forest at the WACA Ground.
1996 - Perth Glory enters the National Soccer League and finishes a creditable seventh on the ladder in the first season.
1996 - Gary Marocchi (by this time coach of Perth Glory) becomes the first soccer player to be inducted into the WAIS Hall of Champions, joining the likes of Dennis Lillee and Herb Elliott on the honour board.
1996 - The WA Football Hall of Fame is established, initially to celebrate 100 years of football in Western Australia.
2000 - Perth Glory finish on top of the NSL to win the Minor Premiership for the first time, but lose in the Grand Final on penalties to Wollongong Wolves.
2003 - Perth Glory win the Grand Final for the first time, beating the Olympic Sharks...and triumph in the Grand Final again in 2004, overcoming Parramatta Power in the decider.
2004 - Football West replaces Soccer West Coast as the State's ruling body and all facets of the code come under one umbrella. Gary Chandler is the first CEO. Peter Hugg becomes the body's second CEO in 2010.
2004 - Western Waves become the first WA women's team to compete in a national league. Alistair Edwards is appointed coach. For financial reasons, the Waves play only half a season.
2006 - WA's Stan Lazaridis is included in Australia's squad for the World Cup finals in Germany, but doesn't get a run in any of the games. Former Perth Glory goalkeeper Tony Franken is the Socceroos Goalkeeper Coach.
2010 - The Australian Matildas win the Asian championship with WA's Lisa De Vanna, Collette McCallum, Sam Kerr and Kate Gill all involved in the series.
2010 - Richard Garcia becomes the first West Australian to appear in a World Cup finals match when he starts in the opening group game against Germany. Another WA player, Nikita Rukavytsya, replaces Garcia after half-time. Both make further appearances as substitutes in later group games.
2011-12 - Perth Glory finish third on the A-League ladder. In the play-offs they beat Melbourne Heart, Wellington Phoenix and Central Coast Mariners on their way to the Grand Final, which they lose in controversial circumstances to Brisbane Roar.
2014 - WA's Adam Taggart makes his World Cup debut for Australia when he starts in the group game against Spain in the finals in Brazil.

*For a more in-depth look at the history of the game in WA see "A Soccer Century" or "Paddocks to Pitches". Both were written by Perth-based football historian Richard Kreider, who is a member of the Football Hall of Fame WA Committee.