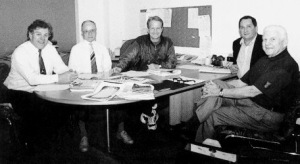 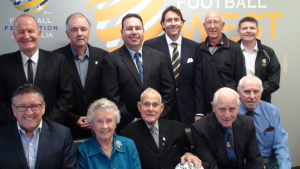 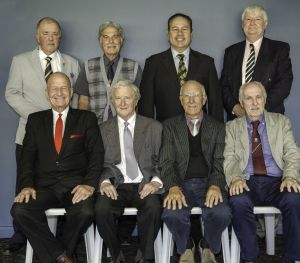 THE Hall of Fame was the brainchild of former State player John O'Connell in 1995. As a member of the code's then ruling body in WA, The Soccer Administration of WA (SAWA), O'Connell put forward the idea of establishing a Hall of Fame to celebrate 100 years of the official recognition of the game in WA the following year, 1996. SAWA, under the presidency of Mr Lou Ricci, readily agreed to the idea and commissioned O'Connell to formulate and head a committee charged with the authority to develop a Hall of Fame.

O'Connell sought out identities in the community who had the background, reputation and experience within the code to inspire confidence in a fair and balanced approach in the establishment and implementation of a Hall of Fame. To this end he attracted (pictured above top) Left to Right - David Andrews, Frank Miller, John O'Connell, Julius Re, Alan Beale and Bob Brown (not in the picture) to join him in this historic venture. The first Patron in 1996 was Sir Francis Burt (Governor of Western Australia), whose ancestors were among the founding fathers of the game in 1896.

The first Committee brought considerable expertise. O'Connell was the joint record holder of State caps and a coach; Andrews was the soccer writer for The West Australian and a former player; Miller was a former writer, broadcaster and State selector; Re was the former president of the Soccer Federation of WA; Beale was a much-respected administrator and terrific goal-scorer in his playing days at club and State level and Brown had been a player, administrator, coach and State team manager as well as being a generous sponsor of the game.

Once the Committee for the Hall of Fame had been selected guidelines were established to formalise a system that would be reflective of all facets of the code to honour those both on and off the field of play. The Hall of Champions would pay tribute to players while the Hall of Recognition would recognise referees, coaches, administrators, journalists and sponsors who had significantly contributed to the games' advancement.

That was later to grow significantly with the introduction of two new categories - the Hall of Legends (2005) and the Hall of Merit for Players (2008).

The first induction into the Hall of Fame was a black-tie event in November 1996. Amongst the inaugural inductees were champions from the code's foundation in 1896 and through the 20th century. In all twenty-nine players entered the Hall of Champions - including such iconic WA players as Alan Beale, Jack Conduit, Jimmy Gordon, John McInroy, Ron Adair, Sandra Brentnall and Gary Marocchi - while seventeen individuals were inducted into the Hall of Recognition.

A special place in the Hall of Recognition was reserved for the Burt family who above all others were responsible for inspiring and establishing the code in WA. Sir Septimus Burt, the State's first Attorney General, and five of his six sons cajoled and persuaded the game's official birth in May of 1896, serving on the first committee and adding their enthusiasm on the playing field. Two sons, Reginald and George, played for WA - with George in the State side until the start of World War One. George then continued after the war for many years in an administrative capacity.

Among the others to enter the Hall of Recognition in 1996 were Alan Vest, regarded as WA's most influential coach, top referees Barry Harwood and Roy Stedman, the much-loved and highly-regarded player-referee-trainer Bob McShane and leading administrator Julius Re.

In 2002, a new committee was formed and endorsed by the SAWA board under the leadership of Louis Prospero (who was then SAWA president). The committee members were Patron Geoff Gallop (Premier Western Australia), Chairman Louis Prospero, Bob Brown, Barbara Gibson, John O'Connell, Peter Dimopoulos, Richard Kreider, David Andrews, Mel Moffat and Russell Whitson. A second induction ceremony took place in November 2002 with a further eleven players welcomed into the Hall of Champions and fourteen others being added to the list of the Hall of Recognition, including a number of personalities who had done sterling work in regional areas such as Albany, Geraldton and Bunbury.

To commemorate the first State match in 1902, when WA were beaten by the touring English Cricket team, the Hall of Fame committee selected the top 100 players of the past 100 years - A Century of Champions. This ceremony took place in July 2004.

In October 2007 the Hall of Fame celebrated the 40th anniversary of the State teams' historic inclusion in Malaysia's Merdeka Cup tournament - and the 30th anniversary of the State women's tour of Asia - with a special function which was attended by Malaysia's Consul General, Ahmad Jazri Mohd Johar, and the WA Minister for Sport, John Kobelke. The State men’s team became the first Australian representative team to take part in an Asian event by competing in the 1967 Merdeka Cup, while the tour of Asia by the State women's team in 1977 was the first by an Australian women's representative side.

The 60th anniversary of WA's historic win at the 1948 Southern States Carnival was celebrated as part of the fourth Hall of Fame induction ceremony in July 2008 with a special presentation to Bob Cherry, one of the last surviving players from the team. When it came to the inductees, eleven players were welcomed into the Hall of Champions with a further seven entering the newly-created Hall of Merit For Players. Eleven coaches, administrators, and media personalities joined the Hall of Recognition.

In May 2012, Sandra Brentnall became the first female player in the world to enter a Football Hall of Legends when she was elevated from the Hall of Champions and given legendary status along with goalkeeping great Robbie Zabica. It was truly a night to remember as this fifth induction ceremony also welcomed nine players to the Hall of Champions, fourteen joined the Hall of Merit For Players and nine referees, coaches, administrators and medics were honoured in the Hall of Recognition.

The Football Hall of Fame committee of 2014  (pictured above middle): from Left to Right back row - John O'Connell, Richard Kreider, Chairman Louis Prospero JP, Patron Julian Burt JP, Roger Males, Eddie Lennie OAM. (Football West Rep). Front row -  Peter Hugg (Football West CEO), Barbara Gibson, Peter Dimopoulos, Bob Brown and Mel Moffat was at the time working towards the establishment of a permanent museum to showcase the abundant history of the game in WA, as well as display memorabilia of national and international significance. It continues to be an objective.

Again the expertise of the current Committee is considerable. Along with the knowledge and experience of original members O'Connell and Brown, chairman Prospero is a former NSL referee and ex-president of SAWA; Males is the former CEO of amateur body WAASSA; Gibson and Dimopoulos were instrumental in founding the organised women's game in WA; Moffat is the former chief soccer writer of The West Australian and Kreider is the State's leading football historian as well as being the author of three books on the history of the game in WA.

The make-up of the Committee had to be revised when Peter Dimopoulos died in August 2015 and both Barbara Gibson and Bob Brown retired. Local football identities Keith Brier and Barry Rogers were brought onto the Committee in 2015. Rogers later resigned and was replaced by George Papaliaris, the former president and coach to the WA women's association.

The Committee, made up entirely of volunteers, then took on a massive task in the sixth induction ceremony. It was also the 20th anniversary celebration of the establishment of the Football Hall of Fame WA and was held with a gala dinner/induction night at Crown Perth on November 26, 2016, and attracted a record attendance of over 430. Of the 32 inducted on the night, two were posthumous awards - Dylan Tombides and John Davies - while Alan Vest was elevated from the Hall of Recognition, in which he was inducted in 1996, to the Hall of Legends. He was the first first coach to be proclaimed a Legend.

The Hall of Fame Patron is Julian Burt JP, whose enthusiasm and dedication to the objectives of the organisation is much valued and also continues the link to the WA game's founding fathers, his ancestors the Burt family.