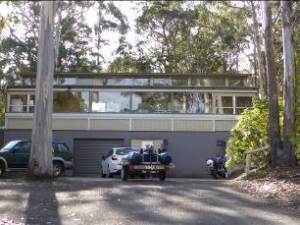 Clubhouse (after the glass enclosing of the front balcony Jan 2014)

ABOUT THE TWOFOLD BAY YACHT CLUB

Club History (based on information supplied by Drew Malcolm, 2004)

The following officials were elected for the first season.

The first interclub event was a sailing challenge between boats from H.M.A.S. "Barcoo", Wallagoot Lake Boat Club and Eden Aquatic Club, with eleven boats taking part. Between the end of 1963 & 1974 there was very little activity & it was not until the 26th September 1974 that interest renewed & a special meeting was held to discuss the formation of a sailing club at Eden. A motion was moved that the Eden Aquatic Club be reformed, and that sub-committees of water sports be formed to organize their various functions within the aquatic club, and this motion was carried forward. It was also suggested that a committee of seven be nominated to draw up a constitution.

At a general meeting held to reform the Eden Aquatic Club on the 17th October 1974, the draft constitution as presented at that meeting was adopted in its entirety.

Interest steadily increased and the Eden Aquatic Club changed its name to the Twofold Bay Yacht Club in 1976. In 1978, the local school building was purchased for $50.00, dismantled and stored at a member's property. The bottom section of the clubhouse was built in 1981, which included in it a boat shed, toilets, a small room and a shed for rescue boat and vehicle. The local school building was erected on top of this, in 1982-83. After using a 2nd hand jet-boat for the clubs rescue boat, the purchase was finally made of a new boat with the assistance of Eden Craft, and this boat is still being used today.

Over the next 20 years, TBYC continued to provide racing/cruising and social events for local sailors, as well as running state and national titles & cruising outings on coastal waters traveling as far north to Bermagui & south to Bittangabee.

The Club's location has afforded it the opportunity to be involved with the Sydney to Hobart Yacht Race over the years assisting those sailors who use Twofold Bay as a refuge & stop over. Regular involvement in `Sail for Cancer' fund raising days, `Try Sailing Days' `Sail Training', the annual Eden Nautical Night and the Whale Festival, have helped raised the profile of the club in the local community.

The Club's current boating activities embrace keel boat & off the beach racing, cruising & social activities. All classes & types of boats are welcome & a varied sailing program is offered between September & April each year. Membership is open to both junior & senior members.